In recent times, dashcams became particularly widespread among the drivers which was caused by many issues like safety, insurance claim, theft protection or simply making recordings of joyful rides and road trips. These devices are installed on the dashboard as they are placed on a special mount which generally comes together with the accessories of the camera. However, there may be occasions in which these holders may be lost, damaged or there may be a need for an extra one. This article will show you the best products available on the market regarding this type of unit. Now let’s take a look at the most recent dash cam mount models which can be purchased.

In situations of a necessity to replace a damaged or lost mount, or the replacement of the unit on another vehicle, you can purchase this extra adhesive windshield dashcam mount. It is perfectly suitable for non-GPS and GPS-enabled versions, while the GPS installation is included in the mount for versions with an integrated GPS. This model is perfectly compatible with the Mini0801, Mini0803, and Mini0805 dashcam models.

This one represents a replacement mounting bracket for BlackVue DR4330, DR450, and DR470 main dashcams. It is the original manufacturer equipment by PittaSoft BlackVue which is perfectly suitable for the above-mentioned models produced by BlackVue.

This is an extra adhesive BlackVue-produced rear windshield mount usable for an additional vehicle or to replace a lost or a damaged mount. This model, which was put on the market in late 2014, is thoroughly designed in black thus offering bigger discretion. It is packed with a pre-installed strong adhesive pad. It is equipment originally produced by the manufacturer – PittaSoft BlackVue.

Did you damage or lose your BlackVue windshield mount or you just need to buy another one? This dark glossy extra mount can serve you in fixing the issue, as it also represents equipment originally produced by PittaSoft BlackVue.

It is an additional adhesive BlackVue DR750LW rear windshield mount usable for another vehicle or to replace a lost or a damaged mount. This mount was designed and placed on the market in late 2015 offering a more stealthy dark look. It is packed with a previously packed strong adhesive. It represents equipment originally manufactured by PittaSoft BlackVue. It solely suits the BlackVue DR750LW-2CH BlackVue dashcam model.

This windshield mount including an adhesive part is intended to replace lost or damaged mounts. It includes a very powerful adhesive pad packed with the windshield mount. It is suitable solely with the BlackVue DR750S-1CH and DR750S-2CH (main camera mount) models.

This one represents an optional installation solution for the Prime X or 1080 Mini action cameras or dashcam models produced by Replay XD. This exquisite mount utilizes a super-powerful suction cup. Knowing that the ReplayXD cameras are water-resistant, you can use this dashcam mount in the exterior or the interior of the car.

The quality of this option is awesome. When you test the mount using the Prime X unit (since this one is more massive in comparison to the 1080 Mini), it gets fixed very strongly to both arched and flat surfaces, whether they are made of plastic, metal or glass. It also always remains attached to the truck in spite of harsh conditions on the road!

You should only make sure that the surface is perfectly clean before you attach anything on it. This model is perfectly suitable with the Replay XD Prime X and Replay XD 1080 Mini dashcams. 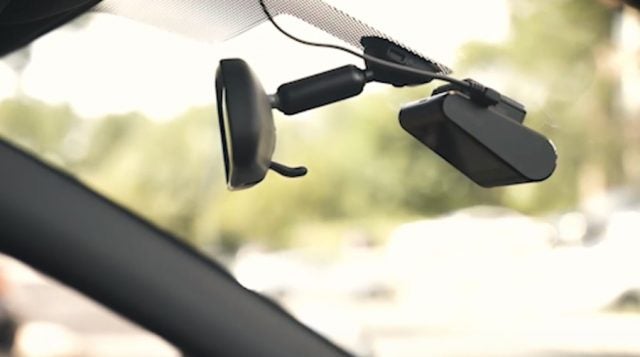 How Can You Set Your Dashcam on a Mount

Although these units are produced to be set very easily, you can always find the best way to put them on the mount for acquiring the finest footage capturing and security. Among the most frequently asked questions regarding dashcams is where exactly to put them on the windshield.

Subscribe to the Ridester.com newsletter and never miss a gig-economy story.

*We don't spam, we promise.

In situations where dashcams affect the functioning of the vehicle sensors, there certainly are recommendable positions to set them to avoid interference and provide maximal efficacy of both devices.

Which is the Best Position to Place Your Dashcam

We all know that many dashcams are supported by wide-angle lenses to provide the fullest possible field of view, meaning these devices should be positioned somewhere in the middle of your front windshield to give you a balanced view field on all sides around your vehicle. One of the conditions making this a necessity is that the dashcam lens always has to be positioned vertically since the horizontal position isn’t suitable.

It is highly recommendable to place your dashcam somewhere near the rearview mirror part so you conceal the body of the dashcam which can potentially cover some parts of your view field – you minimize distractions.

We recommend that you also set the angle of the lens slightly upwards so that the view field covers 60% of the road and 40% of the sky. This position will provide you with a decent balance of light and details. In case your dashcam is featuring a WiFi connection or a cellular phone app, we would advise you to follow the live footage from your mobile device to pick the best possible position and most suitable angle to set your dashcam.

For these purposes, you can put your dashcam somewhere around the middle of the main windshield to get a balanced field of view and capture footage of every side of the vehicle.

Although a large part of solidly equipped new vehicles provides you with sensor technology (for example the Subaru EyeSight) for rain detection, as well as ADAS, they won’t interfere with these sensors because they are pointed outwards and look against your windshield.

The new vehicles are generally geared with a complicated system of sensors positioned on the rearview mirror, as they provide features such as advanced drivers-assistance system, detection of rain, etc. Among the common questions, we receive is the one regarding the possibility of a dashcam inhibiting these sensors, especially in the case of the Subaru EyeSight.

The simple answer to this question is negative, given that dashcams aren’t designed to obstruct these crucial sensors as they are positioned directly in opposition to the windshield and look outside. In situations in which this still represents a concern, you can always move your dashcam to another position on the windshield so everything adapts and works fine.

On some occasions, there are black dots designed on the windshield, which in the automobile industry may be called a “dot matrix” or as a frit. This article will also provide you with an explanation of the role of these dots. Among its functions is the assistance to seal the glass although the part at the back of the rearview mirror serves to prevent sun rays from falling between the two sun visors.

It is perfectly safe to position your holding mount dashcam to this surface as it will not be a source of any electronic obstruction if it’s placed on the dots. In case you have to clear away any kind of stick from the dots, it surely won’t cause any damage to the dots as they are safely blended to the windshield at high temperatures. We find these dots hiding the body of the dashcam particularly useful as they reduce the visibility of the bulk of the camera from outside. You will not face any problems regarding the dashcam as long as your lens sticks past the dot matrix. You should take into account that your dashcam cannot be fixed on this part of the dashboard ideally since the fritty surface won’t allow perfect adhesion. Despite this, some types of adhesive mounts are conformable to different textures.

As we mentioned earlier, the black dots will assist you with your seal for the glass while the part positioned behind the rearview mirror will help block the sun rays. While applying your adhesive tape, make sure that the area is perfectly dry and in circumstances of room temperature (not very cold and particularly not under direct sunlight) before you apply it on the surface.

Before you apply an adhesive mount, which is used on almost all dash cams, you should also perfectly clean your windshield with a window cleaner. As previously mentioned, you should make sure that the area is wiped dry and maintains room temperature (not very low and particularly without exposure to direct sunlight) before adhesives are applied.

At the moment you are done, you should put pressure on the mount and hold it for ten seconds to ensure the adhesive is well attached to the glass. This will make sure the adhesive is well bonded to the windshield and will be well protected from vibrations. Similar guidance can be given to practice upon dashcams used for suction cup mounts. The sticks for this type of mount, together with other suction cups, are best applied on glass facets. In case you set this type of adhesive on other materials in the vehicle such as plastic, leather, or (synthetic or natural) textile, it will end up in an unstable and insecure grip.

Taking out the dashcam on certain occasions can be trickier than its mounting on the windshield. This is generally caused by the adhesive on the mount which is sometimes so strong it can be nearly unreasonable to take out with the usage of fingers only.

This is why we advocate the usage of toolbox gear (some of them may sometimes be packed together with your dashcam accessories) to gently unfasten the stick. On most occasions, the best way to do this is by using a heat gun or a blowdryer. The first step is to turn the blow dryer from the exterior of the vehicle (maybe even the inside) towards the adhesion part.

Five to ten seconds may be enough so you begin shaking the mount in different directions and the glue should loosen up since it is well softened as it was heated up. In case the applied heat is not sufficient for the first time, you can also feel free to use some toolbox gear or use the blow dryer again.

As we explained previously, additional dashcam mounts may help you replace damaged or lost parts, as well as serve as additional units in case you are using a single dashcam in many vehicles. Most of them can be used for many models of dashcams, but we recommend you read their description in the first place. The dashcam mounts are generally a commodity marketed by the very producer of the dashcams.

Subscribe to the Ridester.com newsletter and never miss a gig-economy story.

*We don't spam, we promise.

How do I become a rideshare worker?
How do I sign up to use Task services?
Similar Articles
Products & Services

Where To Mount Dash Cam: The Ultimate Guide

in Safety, Cameras
View All