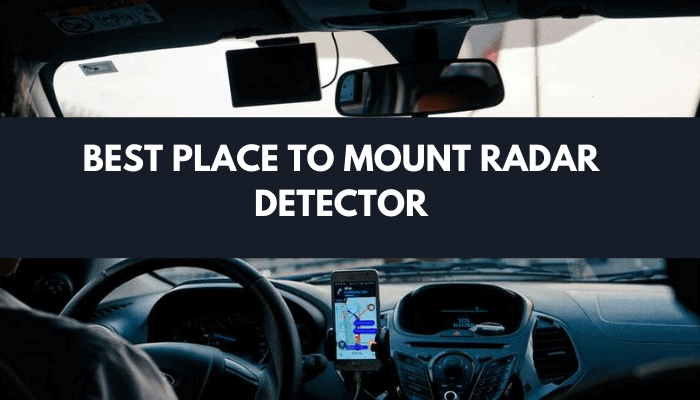 Another question is how does any of these positions impact your radar detector’s performance?

Is it better to mount it high or low?

Maybe skip the suction cup and hang it under the rearview mirror?

Should you decide to get a custom-installed remote mount detector instead of mounting onto your windshield?

Is it right to place it somewhere on your grill?

You have considered these things while you were trying to think of the best position for your radar detector.

There is a rule of thumb that favors positioning the radar detector as high as you can.

According to that, the performance of your detector will improve.

Mounting the device higher provides the user with better detection.

The difference is not big, but it is significant.

You will get the opportunity to intercept radar waves over hills.

There is a smaller chance for vehicles to block the device to receive the signal.

Should You Point Them Up Or Down?

You will also want to be sure that you have positioned your radar detector on the exact level with the ground.

It is also important that you have turned it straight ahead instead of looking left or right.

Grill As An Alternative To Windshield

Most of the users of radar detectors decide to install them on the windshield.

As an alternative to this traditional option, you may opt to set it on the grill of your vehicle.

You may decide for such an option if your intention is to hide the device.

Another cause may be the situation in which the windshield may prevent the radar signals from passing through.

This may be the case in some higher-end vehicles with heated or metallic windshields.

This article should give you an idea about all the dilemmas about the placement of radar detectors.

We will cover the conventional styles first.

This may be a particularly useful solution in the United States.

Here the placement of electronic devices on windshields is illegal.

It may also be useful for drivers that want a better-looking setup.

It is a good alternative for suction cups which are sometimes difficult to stick on the windshield and fall from the position during the time.

In case you are using a powered rearview mirror, you can power your radar detector from it.

You may also use a traditional hardwire cable.

Its mounting may be an extra cost. Additionally, it may partly block your visibility, especially if you drive a smaller vehicle.

Although the installation part is not difficult, it still takes some time.

Mounting High on the Windshield

Another popular option is to mount the radar detector higher on your windshield.

Glancing sideways and a little upwards is more intuitive during driving than looking down.

It will give the driver an almost parallel line to the detector.

Mounting the device high on your windshield is the best choice because this affects the sensitivity and performance.

In case you hardwire the detector to your car, this will be a clean installation.

You won’t have any ugly cables running down your windshield or dash when hardwired.

The device will be within your immediate reach. On this location, the device is hard to detect by potential thieves.

High mounting may also have it’s cons, as it takes a little more to install it.

As the radar detector is away from the headlights and grill area, laser detection is not so intense.

It would be tough to mount a camera to look out the windshield and have the radar detector display in front of you.

This may be one of the reasons why some users mount them low for videos, but high for other purposes.

Mounting on the Center of the Windshield

This isn’t the most popular choice although a middle ground between high and low mounting.

One of the main reasons is that the driver may have the radar detector in front of him during driving.

Among the advantages of such mounting is the accessibility of the devices.

It will be closer to the wipers.

Not all people choose to have a solid obstruction in front of them, no matter their aim.

Among the worst issues of this mounting type is the visibility for thieves and burglars, which won’t be in the favor of users.

It is also not the best way to set the installation up.

It won’t be a stealthy installation either since thieves can always see it.

Mounting Low on the Windshield

This position means the radar detector will stay on the top of your dashboard.

In case the suction falls, you can mount it without any complication.

The device won’t break since it immediately falls on a stable surface.

It is a good location and angle for radar detectors too.

It is pretty easy to mount it here.

If you run the cable down to your cigarette lighter, the neat setup will be simple.

You can do all this without blocking visibility at all.

Being an optimal location for laser detection, this position will provide you the incognito mode.

Yet, things may turn out to be different in practice.

There are some designs that will fit the dashboard layout.

This is particularly useful for evading thieves.

In case you are making YouTube videos, this position will give you the best view.

You can mount a GoPro camera above it and have a total view of the road ahead of you.

Among the shortcomings of this mounting style may be the less range when it comes to detecting radars.

It may be ugly for the eye if a power cable runs down the dash and blocks the stereo button and display.

This one is visible to thieves when your vehicle is in a parking lot.

One of the signs that thieves look for is the suction cup mount or marks on the windshield when removed.

Your wipers may obscure radar and laser signals.

Make sure you mount it above the wipers if you choose to mount them low.

Your radar detector may be far ahead of you if you have an angled windshield.

It can be difficult to reach the mute button or change settings.

Mounting and dismounting will be difficult too.

Remote Mount in the Grill of the Vehicle Some users don’t want anything mounted on their windshields.

This is where they decide to put a remote mount radar detection and custom set it on the grill of the car.

This solution is more expensive as it necessitates the involvement of a professional.

It still brings you a cleaner look.

This is useful for some vehicles that have windshields blocking radar signals from passing through.

The case is the same with heated windshields or those with metallic coatings.

If GPS devices RFID toll passes function bad behind the windshield, you’ll know this is the case with your vehicle too.

It is pretty common that many windshields have little cutaways near the RVM.

This is where the user can mount a GPS receiver, toll pass, or a radar detector.

You can also check if your vehicle has a metallic tinted windshield by seeing if it has a purple tint under sunlight.

Should I Use a Suction Cup, Windshield Mount or Sun Visor Radar Detector Mount?

Of great importance is the way you are mounting your radar detector.

There is a possibility to use a suction cup, windshield mount, or an optional visor mount.

You have to only ensure that the detector aims forward. Such leveling will provide you the best performance.

The performance of the device will be worse if the radar detector is not positioned well.

Some people may prefer mounting the radar detector out of their field of view.

This may help with fewer distractions while driving.

Our tip for using a visor mount is that it may be a great place to mount your radar detector and keep your documents as well.

This is a touchy point since you may get in trouble when the traffic police ask you to pull over.

You should Make Sure your Radar Detector Looks Straight forward

In the end, let’s talk about how you should point your radar detector.

In brief, the radar should be pointing straight ahead.

Radar detectors are directional so you should avoid looking like you are trying to pick up radar from underground.

Doing that can decrease the performance of the radar detector.

When starting out that’s a common mistake that people make.

Except for some cheap models, radar detectors have the design to aim up and down.

This is sometimes part of the mount and includes angling the mount.

Is It Possible To Mount My Radar Detector Externally?

Yes, you can keep the radar detector out of sight forever.

Mounting it on the outside of the grill is the solution to the problem.

This solution is more expensive and you will need a professional’s help.

Yet it will look nicer than standing on your windshield or rearview.

The windshields that some high-end vehicles have are not penetrable by radar signals.

This can affect your radar detectors’ precision.

Heated windshields and ones with a metallic tint can bring the same issue.

In that case, mounting your radar detector from the outside can be the best choice.

What If There Are Tint Strips or Dots on the Windshield?

A common question people ask is whether a tint strip at the top of the windshield or the little black dots can become a problem for radar detectors.

A good place to mount your radar detector behind can be the tint strips.

It can make the detector more hidden which is very good.

The radar detection performance won’t suffer if you have non-metallic tint.

But if you have metallic tint, the detector’s range will drop.

An easy test to find out whether your strip is metallic is locating a weak radar source like an automatic door or a speed sign.

Then you can move the radar detector back and forth behind the tint.

This way you can see if the signal strength changes on your detector.

You can try more different sources to ensure yourself.

This is how you find out if your tint is impacting the radar detector.

The tints will distress lasers because they are a simple light and tint blocks the light.

If we try to give an answer to this question in a few sentences, the answer will be that the position of the radar detector depends on many things.

Some of them are the type of vehicle, windshield, or the very detector.

Stealthiness and neatness of installation are among other peculiarities.

Placing the detector high on the dashboard by a professional offers the best performance.

lso, placing it on the grill of the vehicle will need professional help and may provide the best stealthiness.

Check out the whole article before making a decision.