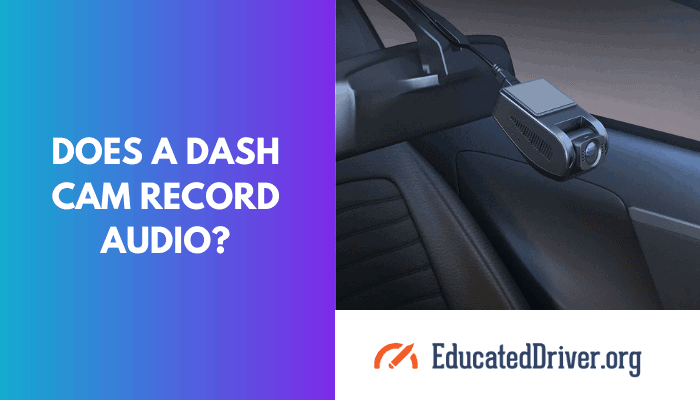 As prices and sizes of dashcams drop, having one became a must.

We’re always getting a dashcam for the same reason.

Record what’s going on in our vehicle’s front or rear side in case of a crash.

Dashcams have proven useful in situations where you cannot explain that a crash was not your fault.

The video material which is captured can get you out of all sorts of trouble.

But, does a dash cam record audio?

While a video may help, a dashcam’s audio is another story completely.

Also, the question, of you should always record audio, is a dubious one.

These are exactly the things that we’ll cover here today.

Does a Dash Cam Record Audio?

Let’s get it out of the way – Yes, dashcams record audio.

They do. And it can be a problem.

This may vary from state to state, but eavesdropping is punishable by law so you should be careful.

It is related with recording conversations of people which are not aware that they are being recorded.

Twelve states in the US require that both the driver and the passenger need to give consent (dual consent) to the audio recording.

Penalties may vary from small fines to jail time.

Take note that illegal recordings are inadmissible in court.

There’s usually no issue if you are present in the conversation which has been recorded.

Lawyers normally say that they have not experienced someone being sued for eavesdropping from within their own vehicle.

Leave your car to the mechanic however and that’s a whole other matter.

When people are not aware that they are being recorded then that automatic audio record on your dashcam must be taken care of.

Don’t forget to press it and you’ll be fine. Otherwise do the following.

If you’re sure that your dashcam is actually recording audio then it is best to simply share that information with anyone that enters your vehicle.

And by “everyone” we don’t mean your friends.

The chance is low that your own friends will sue you for a conversation you had while cruising together.

But pay attention to the occasion and the situation.

If you were in a car crash and the other person sits in your car so you can exchange info…well you could ask him questions there that he/she would answer but maybe not if he/she knew about the audio recording.

Do not risk you being the only one knowing, ask for consent from the other person as well.

We can all forget, but if we get blamed later on there are ways that we can still be safe.

If someone is inside your vehicle

Legal issues may occur also if your dashcam is blocking your field of vision.

Therefore dashcams are not always in plain sight, but they should be visible enough.

If your dashcam is not in any way hidden and there is the red record flashlight on it, then you can also use this in your defense.

Did the people driving with you really not know what the camera was doing in plain sight?

If someone is outside your vehicle

Conversations can happen at any place at any given time.

Let’s say you park and there are two strangers talking outside.

If you see that you are within audio recording reach, always inform people.

If they are not ok with being recorded they can move farther from the vehicle and continue their conversation.

Both video and audio materials can be used as evidence.

If something bad happens you can use it and show it to a jury.

However, evidence can work against you as well.

What’s important to know here is that under any circumstances you should not delete evidence.

Yes, even if it proves that you did something wrong.

This is called the “spoliation” of evidence.

This is much worse than actually doing something wrong.

When you made a mistake, ok you will get punished for it.

But when you delete evidence for that same mistake, then the jury may have a long list of reasons why you deleted that audio recording.

Therefore yes, audio recording may help you but it may hurt you as well.

Counter suing may occur as well if you use an audio recording against someone.

The other person may use the fact that there was no consent and therefore the material which is being used as evidence is not legally produced.

Does a dash cam record audio? Summarizing our findings

There are benefits to having an audio record turned on in your vehicle.

But it all depends on what the laws in your state say.

If there is nothing preventing you from doing it, then you may as well use it.