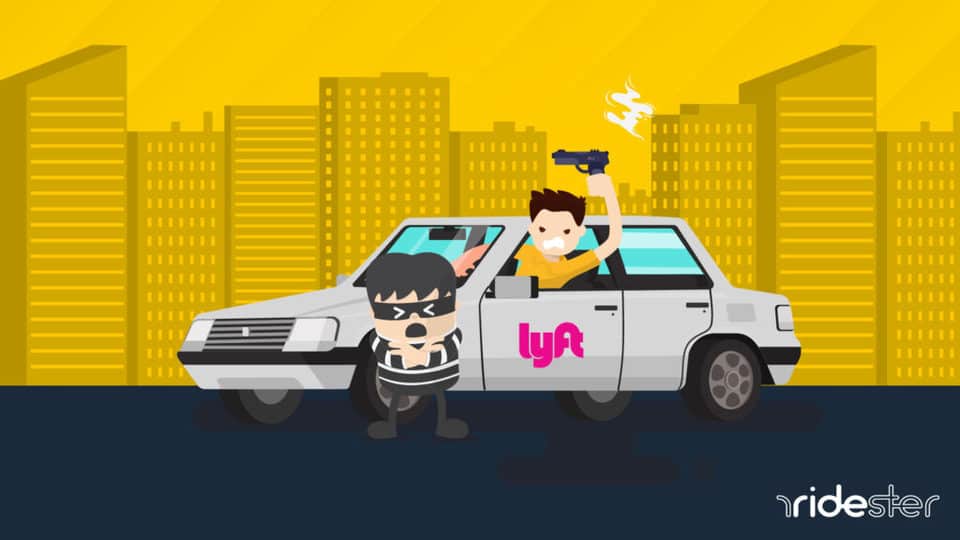 If you drive for Lyft, you need to understand how to try and prevent armed carjacking and what to do if you are the victim of one.

Remember that the company doesn’t want you to defend yourself or your property, so even if you stay on the right side of the law, you might still lose your job even if you have a valid permit to carry a weapon.

Here’s what you need to know about the “Lyft driver shoots carjackers” story that you’ve probably heard people talking about.

Attacks on Lyft and other rideshare drivers happen.

Sometimes, they’re attacked by passengers who want to smoke in the car or think the driver is recording them.

One Lyft driver was severely beaten because a customer’s recording equipment didn’t fit in the car’s trunk.

Most of the encounters between Lyft drivers and their passengers do not end in violence or bloodshed.

But attacks do happen, like in the case when an Uber Eats driver was killed by their passenger.

There are dozens of related articles from other cities like New York and New Orleans as well, some of which end in charges of felony murder.

But, Lyft’s official policy bars the use of weapons by their drivers, even in areas where carrying one is legal.

They justify this as a ‘community perspective,’ as some passengers might be distressed by the mere presence of a legally owned and carried gun.

In one infamous case, a Philadelphia Lyft driver’s car was taken in an armed carjacking.

According to CBS Philly, this is not the only incident involving a Lyft driver and gunplay.

A Philadelphia Lyft driver on the city’s west side was driving a passenger on a Monday afternoon when a Honda Accord rear-ended him as part of an attempted carjacking.

When he stepped out of his vehicle to assess the damage, a criminal from the other car accosted him while wielding a shotgun.

That’s when the Lyft driver used his handgun to shoot the shotgun-wielding suspect in the chest.

According to local news and law enforcement sources, the second suspect in the Honda then accelerated it directly at the Lyft driver, who defended himself again by shooting the second suspected carjacker in the ribs.

Where Did It Happen?

The carjacking incident happened in West Philadelphia, on the 1100 block of North 40th Street.

According to police, the Lyft driver had a valid permit to carry a gun, and the prosecutor declined to charge the driver.

How Did It End Up?

The Philadelphia Lyft driver managed to thwart the carjacking.

According to Fox News, the striking vehicle and the Lyft driver’s car were found a few blocks away on Lancaster Avenue and Parkside Avenue, respectively.

Apparently, both suspects were also carrying a weapon.

Lyft issued a subsequent statement, pledging that they would assist Philadelphia police in their investigation of this incident.

They also offered words of support to their driver and the rider who was in the car at the time.

As of the latest news reports, the ultimate disposition is unknown, though both suspects were admitted to an area hospital in critical condition and arrested for their crimes.

What To Do if You Get Carjacked

If you get carjacked as a citizen, you have the right to defend yourself.

But for Lyft drivers who want to keep their jobs, the rules are different.

Violent crimes like carjacking are on the rise in many cities across the US, so knowing what to do in a carjacking incident is a good idea.

You should also discuss your local territory with other drivers at your local Lyft hub.

Suppose you’re the victim of a carjacking.

Some police departments recommend carrying your phone in your pocket rather than elsewhere in your car due to the risk of a carjacker driving off with your principal means of communication.

This is pretty impractical advice for people who charge their cell phone in the car or use it for navigation.

And, it won’t keep a Lyft driver safe from armed passengers who steal their phone before subsequently assaulting them and stealing the car.

The Chicago Police Department and others also recommend that you shouldn’t resist criminals.

That can be a tough pill to swallow for Lyft or other rideshare drivers because they’re not just losing a vehicle; they’re also losing their means of earning a living.

Plus, even if they give up their car, they can still be shot by the perpetrators.

In the aftermath of a carjacking, always file a police report.

Even though it might seem useless because so many carjackings go unsolved or the suspects are immediately released, it helps protect you.

By filing the police report, you can make a claim for the loss of the vehicle through your insurance or to repair any damage if it’s found in a salvageable condition.

Is Driving for Lyft Safe?

Overall, driving for Lyft is fairly safe, and rideshare driving is not one of the world’s twenty most dangerous jobs.

Lyft has safety policies in place that govern everything from a commitment to health safety to taking a selfie if requested to COVID safety measures.

They say that accountability goes both ways and that riders and drivers are both subject to community guidelines.

How To Ensure Safety as a Lyft Driver

There are a few techniques you can employ as a Lyft driver to try and stay safe.

One of the easiest ways to avoid crimes like carjacking is to steer clear of areas where they’re the most common.

For drivers in some areas, this would make picking up any fares difficult.

But you know your community best, so try and avoid the areas where crime is the most likely to occur.

If you’ve ever heard the old expression, ‘nothing good happens after midnight,’ you can apply it to your Lyft driving hours.

Carjackings can happen any time of the day or night, as evidenced by the Philadelphia carjacking that ended in a shooting.

But, you may feel safer during the day when crooks are more visible.

Criminals don’t want you to have their names if they plan to carjack you.

So, they often employ subterfuge to fool Lyft drivers.

So, following Lyft’s tips for protecting yourself, don’t unlock the doors or invite them into the car before confirming your rider’s name.

Stay alert and aware of your surroundings.

This technique is an excellent way to protect yourself and your riders from those who might be looking to cause trouble or carjack you.

The more you stay focused on situational awareness, the easier it will be to avoid problems.

For instance, if someone bumps their car into your rear bumper in a dark and deserted part of town, you might be suspicious of their intent.

Consider calling 911 instead of getting out to check the damage.

If you think you might be in danger, you can call 911.

Lyft drivers can also request emergency assistance through their app, where there is a button to alert 911 silently, asking for police to respond to your location.

Lyft drivers should be aware of their risk for carjacking.

Some Lyft drivers believe that there is a target on their backs because of the company’s ‘no weapons’ policy.

You can do a lot to stay safe by following these tips and strategies for avoiding trouble, whether you’re working for Lyft or as an Uber driver.