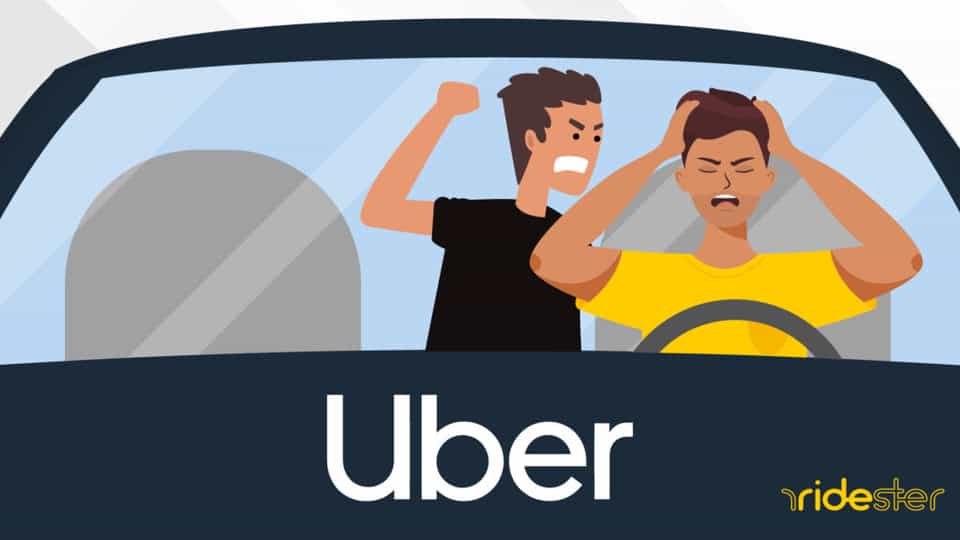 Uber conducts a criminal background check on anyone they hire as a driver.

However, there are no such requirements for riders.

And since Uber cannot vet their riders the same way they can with riders, how safe is it to drive for Uber?

Are Uber drivers at risk for attacks, and what does the company do to protect its contractors?

Keep reading for an in-depth look at how common Uber driver attacks are and what risks come with driving for a rideshare company like Uber.

Do Uber Drivers Get Attacked?

Attacks do not happen often.

Still, Uber drivers have occasionally been attacked by riders.

How Common are Attacks?

Not all of these car-jacking incidents happened during rides, but in almost 70% of them, the assailant was paired with the Uber driver through the app.

Outside of car-jacking, there are also reports of sexual assaults in Uber vehicles.

Although many of the reports are made by riders, the driver is the victim in about 45% of them.

Not all Uber attacks make the news, but some of the more notable attacks have gotten news coverage, including:

One of the most notable Uber driver attacks just happened in January 2022 in Chattanooga.

Zachery Johnson, a local of Chattanooga, had too much to drink at Chili’s and one of the employees called an Uber for him.

Once the Uber pulled up and Johnson got inside, he began to get aggressive with the female driver.

The sexual assault went on for more than 90 minutes while first responders tried to locate the victim, and eventually, local police were able to find the car and arrest Johnson.

While driving through an Atlanta intersection, the Uber driver, Kiana Lynn, got stuck amid a mob.

More than fifty people blocked every side of the intersection, and they began to violently assault Lynn’s vehicle – which was just a rental at the time.

With the mob surrounding her vehicle, Lynn had nowhere to go, and by the time the mob scattered, her vehicle was extremely damaged and Lynn had no way to continue making money.

In March of 2021, an Uber driver, Subhakar Khadka, was assaulted by three different riders after he picked them up.

The assault happened after Khadka asked the riders if they could put on a mask, which is part of Uber’s mandatory mask policy.

The three women then got violent with the driver, with one of the unmasked passengers coughing directly in Khadka’s face and screaming at him.

Another rider snatched Khadka’s phone out of his hand and threatened to physically assault him.

When the driver got out of the car to remove the riders, they even pepper-sprayed him.

Uber and Lyft did remove the riders from their service, and Uber gave Khadka $120 to get the pepper spray residue out of his car.

Another attack in March 2020 left the Uber driver in a coma.

In Manhattan, an Uber driver picked up three men and two women in the middle of the night.

The riders were drinking alcohol in the backseat, and when the driver asked them to stop, they started squabbling with him and themselves.

After the driver pulled over to a sidewalk, one of the riders punched him in the face and knocked him unconscious.

After being rushed to the hospital, the driver was in a medically-induced coma for several days.

How to Avoid Attack as an Uber Driver

While they may not happen often, Uber driver attacks are always a risk  – especially since riders don’t go through any of the background checks or screening that drivers do.

While an attack may not be completely preventable, here are some ways that Uber drivers can better protect themselves while they’re working:

As a driver, you should always verify that you’re picking up the right rider before you allow someone into your vehicle.

This may include asking for the passenger’s name, or asking them what your name is.

If the rider can’t supply the correct name, you shouldn’t let them into your vehicle.

While riders used to be able to keep their accounts anonymous by paying with a gift card or prepaid debit card, Uber now requires them to upload a picture of a valid photo ID.

This feature was installed after there was an uptick in carjackings in the Chicago area, with Uber drivers as one of the prime targets.

Not only is it important for a driver’s safety, but driving safely is also crucial in keeping your riders safe.

This means driving without distractions and not going above the speed limit, but it also means taking care of your car.

The last time you want to have car issues is when you have a stranger with you, so you should not put off getting your oil checked or ignore that low tire pressure light.

While an Uber attack can happen any time of the day, you can still keep yourself safe by avoiding peak crime hours.

This can vary from place to place, but generally, it may be a good idea to stay off the road from 10 PM  until 5 AM.

You’re less likely to pick up intoxicated riders coming home from the bar or the club during the hours as well as anyone else looking to do something nefarious.

Stay in Your Car

Never let a rider persuade you to get out of the car.

Even if they ask you to grab a drink with them or to help them with a quick favor, you’re always safer in your vehicle.

Uber has a two-way rating system.

While riders can rate drivers, drivers can also rate riders, and you should always check a potential rider’s ratings before picking them up.

If they have a rating that’s below four stars, this can be an indicator that they don’t follow Uber’s guidelines very well.

Even if the rating is high and there seems to be nothing suspicious you can point to, always trust your intuition with riders.

If you have a bad feeling about a rider or a situation, don’t be afraid to cancel.

Keep Riders in the Back Seat

While most riders will hop in the backseat without prompting, some may try to sit in front.

If there’s enough room for everyone in the backseat, always keep your riders in the back.

What to Do if You Get Attacked as an Uber Driver

What happens if you do get attacked as an Uber driver?

Here’s what you should do.

The first step is to try and de-escalate the conflict as much as possible.

If you’re dealing with an angry drunk rider, avoid raising your voice or making statements that you know will incite their rage.

Try to get the rider out of your vehicle as calmly as possible.

If the incident goes beyond yelling and the driver tries to physically assault you, you should always call for help.

Not only will the local authorities get you to safety, but they can help you press charges against the violent rider.

If you aren’t able to physically dial 911, Uber does have an Emergency Assistance button on their app that will automatically call authorities and share your trip details with them.

Report an Adverse Event to Uber

The best way to make sure a violent rider doesn’t assault anyone else is by reporting the event to Uber, and here’s how you can do so.

Conclusion: Is Driving for Uber Safe?

Although Uber driver attacks only make up a small percentage of total rides, they can still be a risk for any driver.

However, with emergency assistance, two-way rating systems, and 24/7 agents trained in incident responses, Uber is working toward making its app safer for drivers as well.

Along with providing safety tips for drivers, Uber does have agents that work around the clock if you need to report an incident.

In addition to pressing charges if you need to, reporting to Uber can help ensure that the rider is removed from the service and won’t be able to harm another driver.