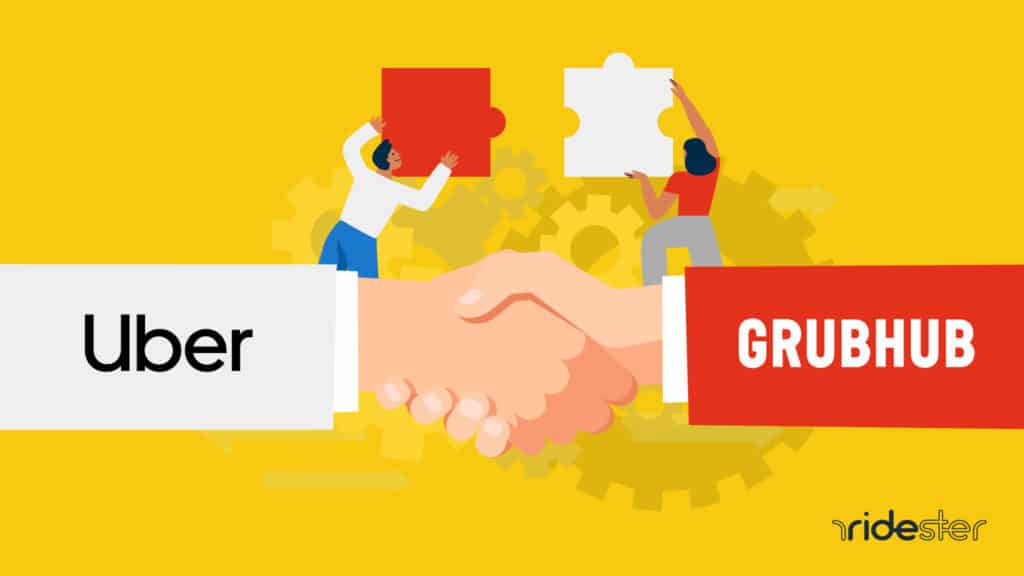 Uber and Grubhub are two of the biggest names in the online food delivery space.

Each partners with both national chains and local restaurants to get food and other goods delivered to your home or office.

Both companies use independent contractors to deliver the food and rely on fees from both the restaurant and delivery person to make the majority of their revenue.

In the early part of 2020, rumors started to circulate that Uber was attempting to acquire Grubhub in an attempt to consolidate the market and become an overwhelming market leader.

So, what happened to the Uber Grubhub deal?

What Exactly Are Grubhub and Uber?

Grubhub started in 2003 as an online-focused food delivery service.

After merging with a competitor, Seamless, in 2013, Grubhub became a market leader.

Uber is best known for its ridesharing services but launched the Uber Eats brand in 2014 using a similar business model.

Because they were so well known, they became an immediate player in the food delivery industry.

Did Uber and Grubhub Merge?

No, Uber and Grubhub didn’t end up merging.

The two sides were in discussions for over a month and even discussed the sale price in depth.

However, several complicating factors stopped the deal from happening before Uber broke off the talks in the summer of 2020. How Much Did Uber Offer for Grubhub?

Uber was looking to acquire Grubhub at a price of roughly $65 per share.

What does that mean for the total purchase price?

Stock prices fluctuate every day, so the exact price is a little bit tough to nail down, but the planned purchase price based on the stock at the time would have been approximately $6.5 billion.

Why Did Uber Not Buy Grubhub?

During the discussions between Uber and Grubhub, there were concerns from industry analysts about antitrust issues.

In other words, because Uber and Grubhub control so much of the United States online food delivery space market, merging the two would create a near-monopoly in the market.

The United States government may have stepped in and stopped the merger before it was final.

Antitrust proceedings can take a long time to resolve in court and can be very costly and resource-intensive.

However, Uber executives later reported that the talks didn’t stop due to antitrust concerns.

Instead, they claimed that Grubhub was negotiating with multiple bidders at once and went with the highest bidder rather than the best potential fit.

Is Uber Acquiring Grubhub in the Future?

In today’s world of business and acquisitions, never say never, but it seems pretty unlikely.

On top of that, since Just Eat Takeaway has acquired Grubhub (which we’ll cover below), it’s unlikely that Grubhub will be available any time soon.

Of course, if Just Eat Takeaway later decides to spin Grubhub off, it’s possible, but that future is difficult to predict at best.

In general terms, the negotiations between Uber and Grubhub put a big spotlight on the present and future of online food delivery.

There will likely be more mergers and acquisitions in this space in the years to come.

If these two companies don’t end up merging, it’s very possible that they will merge with others.

Instead… Uber and Postmates Merger

After negotiations broke down, Uber moved quickly to make another acquisition.

Postmates was initially one of the more significant players in the online food delivery space but had been eclipsed by Uber and Grubhub, as well as Doordash.

Their hurting sales made them a solid acquisition target for Uber.

Postmates has been completely folded into the Uber infrastructure.

Customers can still use Postmates, but the interface and options are all from Uber.

What Company Did Grubhub Merge With?

Almost immediately after breaking off talks with Uber, Grubhub announced that they were being acquired by the European company Just Eat Takeaway.

Just Eat Takeaway is a company based out of the Netherlands that started in 2000.

Just Eat Takeaway is itself a merger of Takeaway and the United Kingdom-based Just Eat.

Takeaway acquired Just Eat early in 2020 for nearly $8 billion, so they are clearly looking to increase their market share through acquisitions.

About the Grubhub Merger

Just Eat Takeaway bought Grubhub at about $75 per share.

That comes out to roughly $7.3 billion, so nearly $1 billion more than Uber offered.

The difference in the purchase price was one reason that Grubhub chose Just Eat Takeaway’s offer.

In Uber’s offer, Uber executives would take over the business entirely after a brief transition period.

Grubhub will act to launch Just Eat Takeaway into the United States market.

Grubhub’s leadership team will remain in place and run the American branch of the merged company.

Even though the Uber Grubhub deal didn’t push through, the negotiations were a national news story in the United States.

The discussion led to Grubhub being acquired and Uber acquiring another competitor, so the future of online food delivery is constantly changing.

Customers are eager to see how it will play it for both availability and how these changes will affect their wallets.

Mr. Delivery: How The Service Works, Pricing and Locations

DoorDash Complaint: What Counts As One and How To File