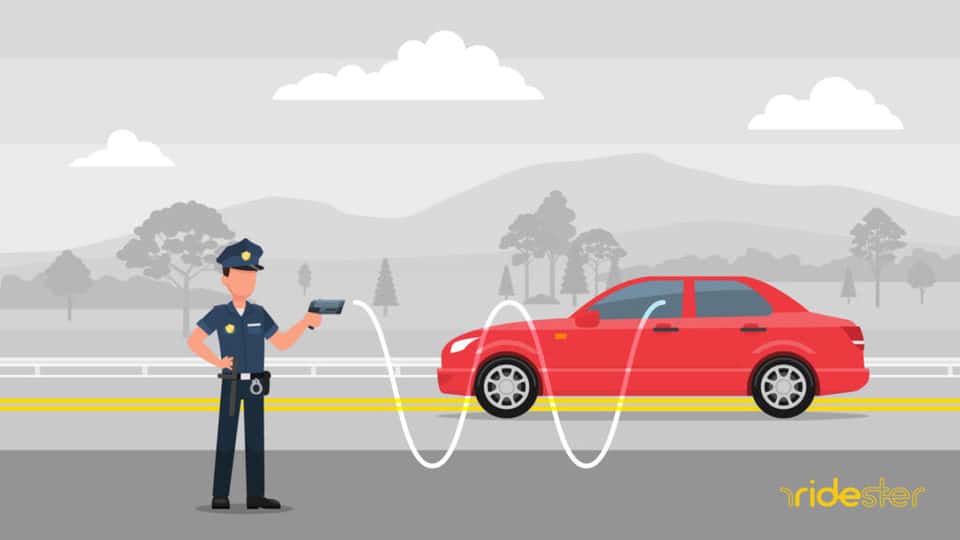 Radar is a technology used to detect different objects in the atmosphere.

There are many different kinds of radar used today.

Below we discuss KA Band vs X Band radar.

Is one better than the other?

At what frequency do they work? Why are they both used?

How Do Radar Detectors Work?

Radar detectors use the beam of a radio wave on a car to measure the expected change in frequency of the reflected wave that bounces off the vehicle.

To understand this concept, you must first understand frequency and wavelengths.

Frequency describes the number of waves that pass a fixed place in a given amount of time.

For example, if a wave takes 0.5 seconds to pass through an area, the frequency is 2 per second.

Wavelengths are the distance between identical points in the adjacent cycles of a waveform signal propagated in space.

The wavelength and frequency of a wave are inversely proportional.

The higher the frequency, the shorter the wavelength.

The amount of space between the waves will be shorter if a frequency is higher (meaning it moves faster).

When a police officer detects the change in frequency of the reflected wave off of a vehicle with a radar detector, he can determine the approximate speed of the vehicle.

To understand the workings of radar detectors and the difference between radar bands, you must understand a radar wave.

A radar wave is a form of electromagnetic radiation between a specific set of frequencies.

A way to understand electromagnetic waves is your radio.

You can tune your radio to a specific frequency.

A radar detector operates the same, but with waves on different frequencies than your radio; FM and AM.

KA and X Bands may sound like the names of your two favorite radio stations.

Instead of picking up music, they detect the signal from a law enforcement vehicle.

If it detects a police car, your detector will notify you that law enforcement is near.

Before we dive too deep into the KA band vs X band comparison, let’s go over a few basics.

What is KA Band Radar?

The KA Band Radar vs. the X Band has short wavelengths, which result in high-resolution.

This high resolution makes it great to use for close-range radars.

KA Band radar is the newest radar band in use and almost always indicates the presence of a police officer.

A big problem for the KA Band is signal loss due to humidity and rain, as water vapor does not resonate at this frequency.

The close-range, high resolution gives an advantage for fewer mistakes.

What is X Band Radar?

The longer wavelengths of X Band radar make it have less resolution.

These longer wavelengths do give an advantage to X Band radar, though.

These wavelengths allow the X Band to detect frequencies from a long distance away.

Because of the low resolution, it is not widely used anymore.

It is not recommended to take off the X Band from your radar detector because it is still used in rural areas or areas without funding for modern radar guns.

Although not as widely used in modern radar detectors, the X Band has its advantages.

Most recommend KA Band detectors, but X Band is popular in rural areas.

What’s the Difference Between K Band and KA Band?

KA Band is more complex than both X and K bands.

It is comprised of radar waves between 27.0 GHz and 40.0 GHz. KA Band guns operate on as many as five frequencies.

Some people can get confused about the KA Band and K band.

K band was adopted a couple of decades ago as a high-performance upgrade from X Band radar.

Because of its higher frequency, it is harder to detect from a long-distance than the X Band.

While there is still some use in law enforcement, K band is typically used in residential operations such as automatic door openers and blind-spot monitoring systems in some vehicles.

Is It Legal To Use a Radar Detector?

The legality of radar detectors in the United States differs from state to state.

In 49 states, it is legal to have a radar detector in private vehicles under the Communications Act of 1934 but illegal in commercial vehicles.

In some states/areas, radar detectors are illegal in all vehicles:

Other restrictions on radar detectors in Minnesota and California deal with them obstructing your windshield view on the highway.

KA Band is widely used in modern law enforcement due to its high resolution.

X Band has been phased out but is still prevalent in rural areas.

KA Band is short-range, while the X Band can be detected from further away.

Typically, the KA Band is preferred over the X Band. KA Band operates at a frequency of 27-40 GHz.

When looking for a radar detector, pick the best fit for your area and weather conditions.

Remember that the X Band works better for inclement weather but is not as widely used anymore.

Are Radar Detectors Legal To Own And Operate In 2023?

in Technology, Radar Detectors
View All