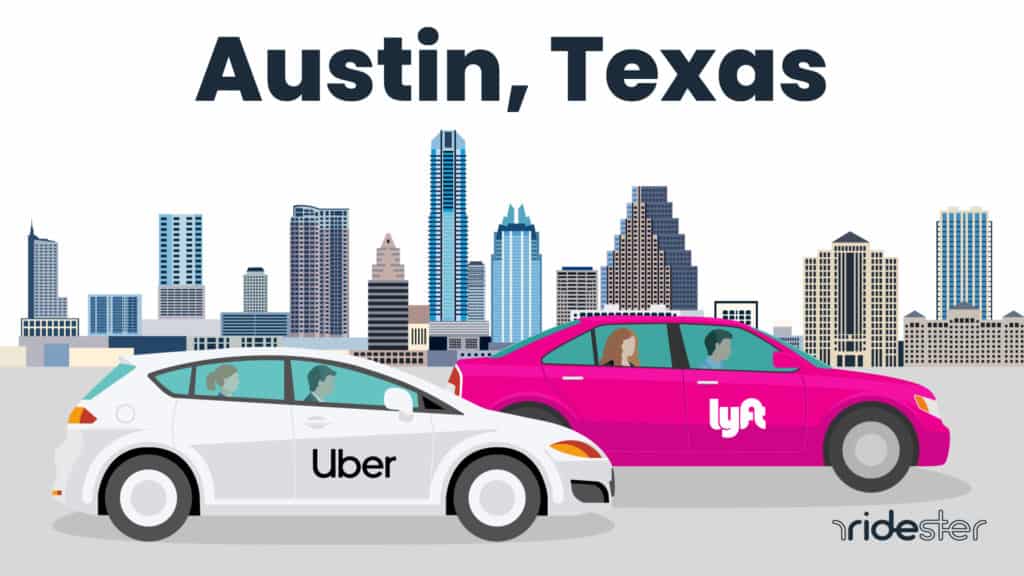 As one of the fast-growing and dynamic cities in the United States, Austin supports an almost non-stop stream of entertainment for residents and tourists alike to enjoy.

From festivals to concerts, conferences and summits, bachelorette parties, and more, Austin is the place to be.

With increased attention to this beautiful city comes more congestion and traffic.

They say everything is bigger in Texas, but sometimes the parking spots and traffic lanes are not enough to support the crush of people in peak times of the year.

This technological innovation has transformed the way we move, so it was only a matter of time that we saw ridesharing in Austin.

It’s hard to imagine navigating exciting cities as a resident or a tourist without the help of reliable, affordable rides from gig economy drivers.

Ridesharing is when you book a driver, vehicle, or another transportation service quickly and conveniently through a mobile app.

There are many services to choose from when looking for a safe and dependable ride throughout Austin and the surrounding communities.

This article will describe some of the most popular options, as well as new apps to consider the next time you’re on the town.

Does Austin Have Rideshare?

Austin is a car-centric city, with 75% of commuters and tourists in the Austin area traveling in a private car by themselves.

In addition, about 100,000 travelers use public transportation services daily in the larger Austin area, out of a total metro population of nearly two million.

Rideshare services quickly took hold in this University of Texas town, with Uber and Lyft quickly becoming a popular way to haul anyone through this vibrant city.

As Austin experienced a population and popularity explosion in the 2010s, these apps could not have come at a better time.

Carpool services like these relieve congested roads, offer flexible employment for drivers, and provide a convenient alternative for someone who shouldn’t be driving.

While many people may never have used a taxi before, calling an Uber has become commonplace.

Although being a relatively new technology across most of the United States, the history of ridesharing services in Austin already has some tense and complicated details.

After a hiatus for the traditional ridesharing services like Uber and Lyft, these services have been reinstated.

Austin supports a variety of sharing services to help the transportation needs of its many citizens.

While the industry is ever-changing, it seems that the gig economy and sharing services with others is here to stay.

Uber in Cancun: Does Cancun have Uber and other rideshare services?

Is Uber Shut Down in Austin?

Traditional ridesharing apps like Uber and Lyft removed their services from the Austin market in 2016 after a dispute about how these disruptive technology companies should operate and compensate the independent contractors who drive for these apps.

After about a year of a hiatus, Uber and Lyft returned to Austin at full strength, without enacting any changes to its structure.

Riders can now access Uber and many other ridesharing and long-term car rental services, convenient for both tourists and residents.

While the big-name delivery and pickup apps left town, plenty of other services existed and continue to serve the population of Austin and visitors to the city.

How Long Did Uber Leave Austin?

After facing political opposition that would have forced these mobile apps to alter how they operate, Uber and Lyft shut down service to Austin for about a year, from 2016 – 2017.

Uber and Lyft have also done this in other American cities, and it has been threatened in London as well.

In 2016, the local government in Austin objected to how Uber and Lyft operate their business and treat their employees.

Austin voters also wanted a fingerprinting database for drivers to promote more accountability when hiring a private car and a driver who works independently.

Facing these regulations, Uber and Lyft decided to pull out of the Austin market instead of complying with these new terms.

These major ridesharing companies said these regulations are too cumbersome and will result in unacceptably long wait times for riders.

Riders are already seeing the “no Uber cars available” error message within their apps, so longer waits would be the last thing they needed.

But, after about a year of removing services to the Austin audience, Uber and Lyft returned and offered the full-service ridesharing product again.

During Uber and Lyft’s absence from Austin, local ridesharing apps were also developed, with RideAustin operating until 2020.

Is Lyft Shut Down in Austin?

Lyft removed and reinstated its services in tandem with Uber, as both services operate very similarly.

Both Uber and Lyft riders and drivers experience almost an identical service.

Other popular Lyft services are available in Austin, including its bike-sharing service for riders looking for more flexibility in traffic and a healthy option.

While Lyft bikes are widely available in the city, Lyft removed the electric scooter alternative in 2020.

Summarizing The Battle Between Austin and Rideshare Companies

Within about ten years of founding the most popular rideshare companies, Uber and Lyft, Austin blew the whistle on some of the operating practices of these disruptive technology companies.

As with any groundbreaking innovation, ethical and legal concerns arose over time.

In 2016, voters in Austin decided what they wanted for the future of rideshare companies and how they interact with the residents and visitors to the city.

One significant change voters wanted to see was background checks for all drivers as an increased safety measure for all participants.

Voters also wanted these tech companies to disclose how they compensate their workers, including Uber and Lyft’s fees from each ride.

Bad publicity for these apps still endures their choice to classify workers as independent contractors, not employees.

Based on this response from voters, Uber and Lyft decided to leave this market instead of complying with the voters’ wishes.

These apps have also pulled out of other Texas service areas, including Houston in 2014 and San Antonio in 2015, both over fingerprinting.

In the one-year break where Uber and Lyft left Austin, other grassroots rideshare apps sprang up to meet Austin’s demand for residents and tourists, including during its signature festival, South by Southwest.

These grassroots apps could not handle the market, and most folded.

In 2017, Uber and Lyft returned to Austin after the government passed state-level legislation to remove regulatory barriers for ridesharing companies and allow Uber and Lyft to continue sharing little transparency with users and not offering employee benefits to its drivers.

Ridesharing apps like Uber and Lyft are currently operating at full strength after a triumphant return to the market in 2017.

As the gig and sharing economies evolve in our modern society, similar options have also popped up to help people get to where they need to go.

The demand for flexible transportation options in Austin is higher than ever, but it can be challenging to handle all the various services and how they differ from each other.

This industry is constantly changing as the needs and demands of its consumers evolve. In Austin, there are a variety of ridesharing options.

Some of the most popular are listed below.

There are many options available outside of Uber and Lyft.

Now back in Austin, Uber has become a household name for ridesharing services.

Riders choose nearby drivers to get them to their destination, all through a free mobile app.

Drivers are regular folks like you, and fees are calculated by length, with other additional fees attached.

Read More: How to use Uber

RideAustin sprang up in 2016 as an initial response to the pullout from Uber and Lyft.

RideAustin proudly delivered what the Austin voters wanted and was the only Austin ridesharing agency to fingerprint 100% of its drivers and had a zero-tolerance policy for drugs.

RideAustin operated its service as a nonprofit, tailoring itself as a safe option catered to its specific Austin community.

Riders were also allowed to round up their fares to donate to local charities.

According to the Migo website, of the 61 diverse ways to move throughout downtown Austin, 39 of them can be found on the Migo app.

Vonlane provides a specific service, offering luxury motor coaches in the Austin area and up into Oklahoma.

These motorcoaches offer half the seats of a standard motor coach, providing maximum legroom and personal space.

This service is similar to Blacklane, one of the nation’s top professional chauffeur providers.

Services from Ubiquitous Driver are limited to luxury car rentals for individuals and small groups, with a knowledgeable personal driver.

These black car rides offer more than a taxi service, with a driver offering customized upgrades to your trip.

Only the most premium cars and SUVs are available.

This service is similar to VanGo, a popular shuttle app around the country.

This service requires a 24-hour advance reservation and is not available on demand.

Carpool-like rides are widely available and are often used for late-night crowds and those traveling to and from the airport.

If you’re open to driving someone else’s car, there are some more options available for you below.

Fasten was founded at the same time as Ride Austin as a response to the departure of Uber and Lyft from Austin in 2016.

Fasten did not survive once Uber and Lyft returned to Austin, and the company folded in 2018.

Using the Zipcar app, hopeful drivers can reserve a vehicle with ultimate freedom without the stress of car ownership and maintenance.

Rental rates for Zipcar are affordable, making this service available to even the most budget-friendly travelers.

Buy a membership for additional perks and cost-saving, like free gas and roadside assistance.

Suggested Read: How does Zipcar work?

While Car2go is no longer available in Austin as of 2019, this service is still thriving in New York City, Washington D.C., and Seattle.

Car2go offers a similar system to Zipcar, allowing drivers to access and drive away in a car using the app, including this app’s signature Smart car.

There is a wide variety of rideshare and rental options to help you focus more on having an unforgettable time in Austin and less on how you’ll get there.

There’s a rideshare option for everyone from global brands to local, grassroots options for safe and convenient travel.

1 thought on “Ridesharing in Austin: The Best Services to Get Around Town”