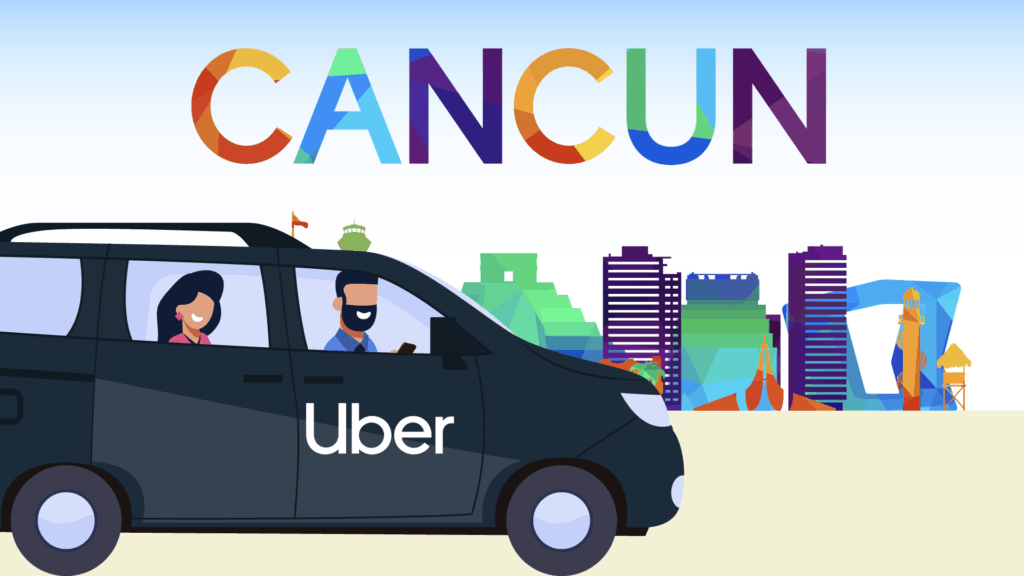 Are you planning a trip to Cancun?

Uber makes it easy to get around Cancun, just like it does in the US.

Read on to learn how to use Uber in Cancun, why you should use it, and what to expect.

Is There Uber in Cancun?

Yes! Uber works throughout Mexico, and Cancun and the Riviera Maya are no exceptions.

While Uber is not the only ridesharing service operating in Cancun, it is one of the most popular.

You can use the same Uber app you have used in the United States in Cancun.

Uber has a complicated history in Cancun due to disputes with the taxi union.

The taxi drivers of Cancun were not very happy about Uber operating in the area, and there were some physical altercations.

For a while, Uber left Cancun, and then it returned, although many drivers are wary of using it.

Related:Uber vs Taxi – Which is better for riders?

Is There Lyft in Cancun?

No, there is no Lyft in Cancun, Tulum, Playa Del Carmen, Mexico City, or anywhere in Mexico.

Lyft only operates in the United States and Canada.

However, there are other ridesharing apps in Mexico, like Didi and Cabify, but you may only be able to order taxis on those apps in Cancun.

Can I Use Uber from Cancun Airport?

No. Cancun Uber drivers don’t go into Cancun International Airport due to legal and other considerations such as rows with taxi drivers at the airport.

There are other transportation options, though.

For example, there is a public bus going from the airport, as well as licensed taxis and private ride services.

Since licensed airport taxis are expensive and you must book them in advance.

Consider getting the bus to the ADO bus station in Centro and ordering an Uber from there to your hotel.

How Much Does Uber Cost in Cancun?

You’ll find the prices of Uber in Mexico overall, including Cancun, significantly cheaper than prices in the US.

Uber prices vary by country, and its prices in western countries like the US, France, and the UK are amongst the highest.

The cost of living in Mexico is cheaper overall, and the cost of an Uber reflects that.

For short distances within Cancun, Uber shouldn’t cost more than the equivalent of a few dollars.

You can pay via PayPal or credit card, but you’ll be charged in Mexican Pesos, Mexico’s currency.

Often, for very short distances, it will be just a dollar or two.

Prices can vary based on season, the demand at any specific time, how many drivers are available, and more.

You can get a price estimate for an Uber ride in Cancun using Uber’s Get a Price Estimate tool.

Actual on-the-ground prices may be different.

Suggested Read: How Much Does Uber Cost? Fare pricing, costs, fees, and more.

Is Uber Safe in Cancun? One of the reasons so many tourists and expats in Mexico prefer Uber is that it is a safe alternative to local taxis.

Taxis in Mexico are known to be sketchy at times, and Cancun is no different.

From small issues like overcharging you on a ride to more serious concerns such as kidnapping, tourists have experienced them all.

Also, not all taxi drivers speak English, so communicating with them and getting to your destination can be a hassle.

On the other hand, Uber is very safe.

While it’s not foolproof, Uber conducts background checks on drivers before they can sign up and drive.

In addition, each driver has a driver rating and reviews from previous riders.

You can see how long they have been driving for Uber, how many rides they have completed, and their general star rating, as well as real reviews other people have left.

If you get a new driver who has just had a few rides, you can always cancel it if you don’t feel safe.

If you get a top-rated driver with years of experience and thousands of completed rides, and a 5-star rating, you can be pretty sure they are legit and reliable.

Just make sure their face matches their profile picture.

Uber also lets you track your ride in the app, so you can make sure you are going the right way.

You can share your trip with friends and family so they know where you are, and you can instantly call authorities from the app if you feel unsafe at any time.

Are Taxis Safe in Cancun?

Most people who take taxis will not have any problems, but many people feel like taxi drivers try to overcharge tourists and that they are too aggressive.

Safety is always a concern in Mexico, and when you hail a taxi off the street, you don’t get any of the safety standards that Uber has.

For example, you have no prior information about the driver, nor do they have a review score to worry about as a deterrent against bad behavior.

Why You Should Take an Uber Over a Taxi

In addition to all the safety reasons I mentioned, Uber provides convenience.

Many drivers speak English, but even if they don’t, you don’t have to explain where you want to go.

It’s all laid out for them in the app.

Also, you will know your price upfront, so you won’t have to worry about taxi drivers ripping you off.

How to Take an Uber in Cancun

To take an Uber in Cancun, simply download the app, create an account, and order a ride, as directed in the app.

If you have been using Uber in the US, the process is the same.

Enter your destination, and an Uber will come to your pickup location.

Be aware that some Uber drivers may avoid picking you up at places where taxi drivers congregate due to safety concerns.

Another thing that might surprise you is that Uber drivers might expect you to sit in the front seat in Mexico and other Latin American countries.

That’s because the legality of Uber is a gray area, as Uber has been fighting to become legal and comply with tough regulations in many cities like Cancun.

Uber drivers don’t want to be so easily identified as such, as they may be afraid of the police stopping them or taxi drivers getting aggressive with them.

That way, it appears as if the driver is simply transporting a friend or relative and not working for Uber.

Other Ways to Get Around Cancun

Uber isn’t the only way to get around Cancun.

Here are some other popular transportation methods.

While Cancun is a city, most hotels and restaurants are in the main hotel zone.

It’s a very walkable area, and you can get from point A to point B rather quickly and easily.

Of course, sometimes it’s really hot outside, or the weather is bad, and you don’t want to walk.

If you can’t get an Uber, you can also hail a taxi.

However, I’d recommend asking your hotel to call a taxi for you, as that will be a bit safer.

Another option is to order a taxi using an app like Didi, which is a Chinese competitor to Uber that allows you to order taxis in addition to rideshares.

In fact, in Cancun, you can only order taxis on Didi.

A great way to get to and from the airport is to ask your hotel if it provides a free shuttle.

If it doesn’t, it might offer a paid shuttle at a great rate.

Hotel shuttles are sometimes shared with other passengers, but they’re safer and more convenient than a taxi, as they will take you straight to your hotel.

Official shared shuttles from the airport start at $12.

You can also arrange a private shuttle for airport transportation or to go on excursions outside Cancun.

You can even arrange for a private driver to take you around Cancun for a day trip.

However, the cost for that is too expensive for many.

Here are answers to some common questions about using taxis or Uber in Cancun.

How much are taxis in Cancun’s Hotel Zone?

Taxis tend to be more expensive than Uber.

Within the hotel zone, however, it can be as little as around $1–2 for a short ride.

Twenty Mexican Pesos (MXN) are around $1, so expect to pay 20–40 pesos for a short ride within the hotel zone.

If you go out of the hotel zone into the city or downtown Cancun, you can pay anywhere from a few dollars to $10, but it depends on the distance.

That’s if you are using

UberX, the standard tier of service, and not the more expensive UberXL.

How much is a taxi from the Cancun Hotel Zone to the airport?

Expect to pay around $25 at the lower end for a taxi straight from your hotel to the airport.

It might be a bit cheaper when hailing one from the street, and it might be more expensive from certain hotels.

Don’t worry about getting around Cancun—Uber is widely available, and the hotel zone is very walkable.

Even if you don’t speak Spanish, you’ll find getting an Uber in Cancun pretty easy.