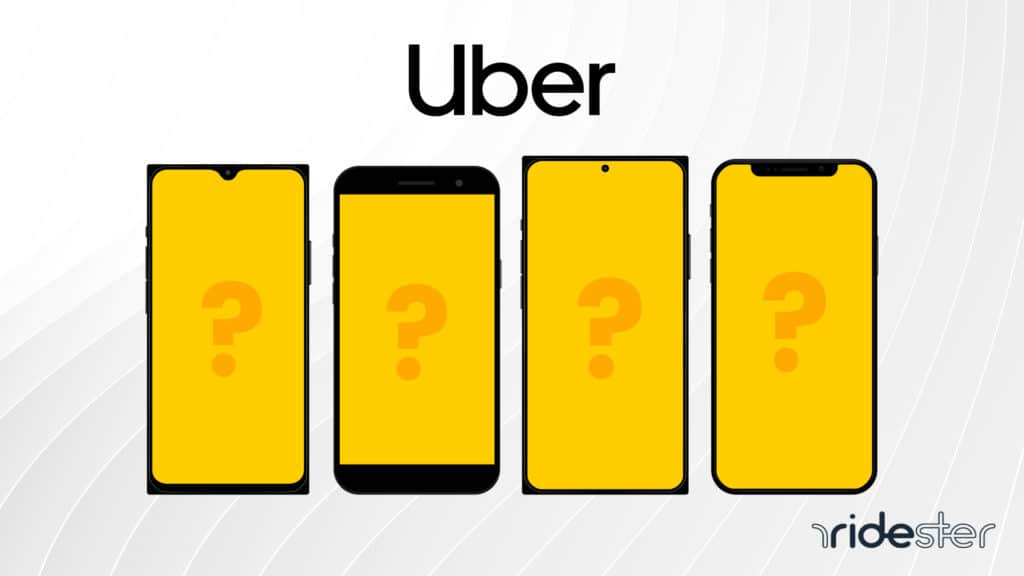 Taxis are a thing of the past, and Lyft and Uber drivers have become much more mainstream.

However, without a cell phone, neither rideshare drivers nor those seeking a ride will be able to connect.

What are the best phones for Uber drivers to ensure they are meeting their customers’ expectations?

Below, we outline the best phones for Uber drivers to have in 2022 such as the Apple iPhone, Samsung Galaxy, and Google Pixel.

You’ll learn all about the type of requirements that Uber has for its rideshare drivers.

There are specific requirements for Uber drivers.

Included in those requirements are specific points that even the best phones for Uber drivers must meet.

If you have an Android phone, you’ll need a smartphone that is from 2013 or newer to operate the Uber driver app, according to the Ridesharing Driver publication.

Essentially, the best phones for Uber drivers include Android 5.0 or newer to get the best results.

The iPhone requirements for those using the Uber driver app are iOS 8 or newer.

In addition, drivers shouldn’t use iPhones older than an iPhone 5.

For the best outcomes when using the Uber app, you should choose iOS 9 and iPhone 5s or newer versions.

You’ll find that any smartphone you choose that aligns with Uber phone requirements will need to have several basic features, which we cover below.

Basic Features Every Uber Phone Should Have

The best phone features will include a large battery life and a good data plan that provides a powerful WiFi connection.

The type of smartphone features that every Uber driver will need to have:

It also needs either a Snapdragon or Mediatek 8 core processor.

Furthermore, the basic features of every Uber ridesharing driver phone come straight from the Uber application and the company itself.

For example, in 2018, Uber unveiled an innovative method for drivers and riders to contact each other via the voice over Internet protocol (VoIP) feature as part of the Uber app, according to The Verge.

This feature is rather similar to the FaceTime application found on iPhones.

Along with the VoIP feature, other communication platforms available through the Uber app include in-app chat and text messaging.

Evidently, communicating via an Internet connection is cheaper than cellular roaming calls.

Furthermore, the Uber app also includes GPS features that allow drivers to pick up riders in a more streamlined fashion.

In addition, on the front page of the Uber mobile app is a map with regions showing where there is a greater demand for drivers and a rise in pricing.

The app also has a destination filter that drivers can use twice a day, which allows drivers to choose only rides on a route to their destination.

These mobile app features will help Uber drivers get more riders and improve their overall profits.

The Best Phones for Uber Drivers

Uber drivers will need to choose one of the best smartphones out on the market to get the best results when picking up riders.

Steve Jobs first unveiled the Apple iPhone on January 9, 2007, and tens of thousands of iPhones were sold the following June.

The following year, the iPhone 3G came out, which made a huge splash as well.

Over the years, the iPhone has made a major impact on how society operates and how people work together.

The Samsung Android phones first began with the Samsung Galaxy S phone in 2010, according to a guide from Android Authority.

Within the next year, by late 2011, Samsung smartphones took up about 24 percent of the market as a whole.

This particular cell phone has a 5-inch touch display, an eight-megapixel selfie camera, a 12.3-megapixel main camera, and 4GB of RAM.

It also comes with GPS navigation and 22.7 GB of available storage.

Lastly, this smartphone has multiple features including WiFI, GPS tracking, and Bluetooth connectivity.

Some of the best Nokia smartphones include:

You’ll find that there is a long list of phones that Uber does not allow their drivers to have.

A few of these banned phones include:

Essentially, you will find that older versions of Androids will not be allowed, such as the ones that came before Android 6.0.

Furthermore, iPhones should be an iPhone 6 or newer.

You’ll discover that smartphones made before 2016 are too old to work properly on the Uber platform.

Phone Accessories You Should Consider

Every Uber driver will need to have useful cell phone accessories in their car.

Some of the best phone accessories should include a fast-charging charger as well as a wireless charger and a phone charger adapter for your car.

You can also consider bringing a portable charger when driving riders all day.

Phones will also need to be protected with either lightweight, thin cases or stronger and more durable phone cases.

Along with a case, your smartphone would benefit from a screen protector to prevent scratches and cracks.

Some earbuds can help cancel out sound in a bustling city while others will play music as you drive around town.

Best of all, you can purchase them in any shape or color.

With the right phone accessories, your driving gig will be much more pleasant and comfortable.

Here are some basics to cover for Uber drivers’ phones.

Do you get a smartphone from Uber when you sign up to be a driver?

Uber does not provide its drivers with a new phone when they sign up for the service.

However, there are phone discounts for driving rewards from various cell phone carriers that partnered with Uber.

You can get a phone discount as an Uber driver from AT&T, Sprint, and Verizon.

It is not possible to set up the same Uber account on multiple smartphones with separate phone numbers.

If you have two smartphones with the exact same phone number, you should be able to have the same Uber account on the two devices.

Whether one is a rider or a driver, having the same account on two devices is simply not possible.

If a rider sets up an account on a second phone, their user history will look like a brand new user and they will be unable to have the same account between the two devices.

Therefore, be sure to use only one smartphone for your Uber account or the company may delete your previous one.

Should you get a second phone for Uber?

Since two different smartphones cannot use the same Uber account, it would not provide you with any benefit to purchase a second phone when working solely for Uber.

However, if you choose to become a driver for both Uber and Lyft, having two phones may be advantageous.

Doing so may help you switch between the two drive-sharing apps.

The best phones for Uber drivers are usually ones that are relatively new and came out in 2016 or sooner.

There are specific features your smartphone will need such as Internet access and communication apps.

If you’re looking to become an Uber driver, be sure to purchase one of the recommended smartphones along with useful cell phone accessories.