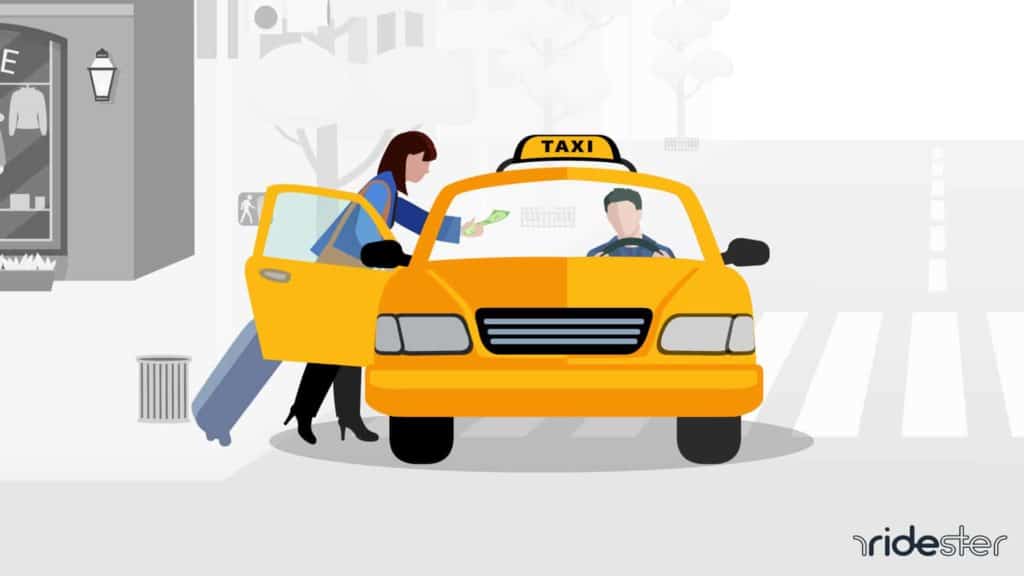 Whether you’re going out for holidays, a night out, or business meetings, you’ll have to tip your driver.

Tipping is a way of appreciating a taxi driver, especially after offering courteous and overall good service.

It accounts for a significant portion of the driver’s income.

The majority of people like to give tips, but there’s a lot of uncertainty about how much is appropriate.

Read on to learn how much to tip taxi drivers and why.

How Much Do Taxi Rides Cost?

However, they charge a base or flat fee for every ride in an average city.

In addition to this flat fee, taxi companies charge some amount for every quarter, half, or full mile, typically $1 to $3 per mile.

That means if you’re traveling 20 miles, you’ll end up paying anywhere between $21 to $44.

Some companies charge this additional cost based on minutes instead of miles.

This type of taxi fare is more common in large cities like New York with heavy traffic.

It enables the cab companies to break even with all the congestion on the roads.

How to Determine How Much to Pay

Several websites can help you estimate your taxi fare.

Schallerconsult.com is one example of various taxi prices depending on one’s geographical location.

For example, if you are in Honolulu, Hawaii, a long trip would cost you $40 or more.

A similar trip to Cleveland would cost you $22.

TaxiFareFinder.com is another website you can use to estimate your taxi fare.

You input your point of pick up and destination, and the website provides an estimate of taxi ride costs in your area.

Every time I visit Houston, I use YellowCabHouston.com.

If the driver has to wait for you, expect the cost to increase to as much as $24 per hour.

Periods between 8 p.m. and 6 a.m. attract a surcharge.

It’s worth mentioning that an average cab ride in the U.S. is 5 to 12 miles long.

Are There Extra Costs?

Some of the extra costs that apply to taxi cab fare include the following.

1. Ordering a Taxi to a Specific Location

An extra $5 to $15 may apply when you call a taxi and request a pick-up at a specific location.

If you hail a cab on the street, you don’t incur this charge.

If the taxi driver has to wait for you for a long time, you may pay anywhere between $15 and $40 per hour for the wait time.

Again, this depends on the taxi company you use.

Some companies apply a premium surcharge during certain times of the day.

Sometimes, a fuel surcharge applies, regardless of the distance the taxi driver has to drive.

The rate could be anywhere between $2 and $5 per trip.

Do You Tip Taxi Drivers?

Generally, a tip should be a percentage of your trip’s total cost.

Most people’s style of tipping taxi drivers involves simply asking them to keep the change.

In fact, this is the standard practice in most places.

Every time I plan to use a cab, I ensure I stock up on $1 and $5 bills to make tipping easy.

Why Should You Tip Taxi Drivers?

Some of the reasons for taxi tipping include the following.

The average hourly rate for taxi drivers in the U.S. is $18.

Several factors determine this hourly rate, such as:

In fact, most taxi drivers are underpaid.

A tip can be a motivating factor for many drivers to do a good job.

There’s no better way you can thank a driver for excellent service than by tipping them.

In general, reward any driver who tries to make your ride as comfortable as possible.

3. A Standard for the Service Industry

Tipping happens to be a standard for the service industry.

It’s not important what type of worker it is.

Whether a porter, Uber driver, a waiter in a restaurant or hotel, tour guide, room service, or other restaurant staff, it’s the right thing to do.

Below are factors that influence the cash tip you leave a taxi driver.

If your cab driver willingly and cheerfully helps load and offload your luggage, it’s best practice to reward them.

Likely, such a driver offered a pleasurable riding experience.

Consider tipping at least 20% of the ride cost.

If you’re making a long tour and the driver makes it pleasant all through, don’t hesitate to tip them.

Just check the cab’s meter as you approach the destination, do a quick calculation, and tip them based on the ride distance.

Did your taxi driver take the fastest route to get you to your destination?

If he paid attention to traffic and took steps to avoid heavily crowded streets, you have a reason to give a higher tip.

Remember, some drivers will do nothing to ensure you reach where you’re going faster.

If the driver portrays an extensive understanding of the area and suggests alternative routes to advantage you, it’s good to reward them more.

How Much to Tip a Taxi Driver

You should tip your taxi driver at least 15 to 20% of your trip fare.

If you think of giving anything less than 10%, you might as well leave without tipping at all.

If your fare is less than $10, leave a tip of not less than a dollar.

Something like a 50-cent tip is insulting and more of a hassle to come up with.

It’s worth noting that asking for change once you tip your taxi driver shows your lack of tipping etiquette.

How Much to Tip for Excellent Service?

If the taxi cab driver goes out of their way to make your ride as comfortable as possible, tip 20% or higher.

For instance, if the driver assisted with luggage, was friendly and cheery throughout, suggested top spots to visit in the area, and got you to your destination on time, that’s good service deserving of more.

On the other hand, if the driver offered below-par services, don’t bother tipping them.

If you do, you’re rewarding and encouraging poor service.

Here are some frequently asked questions about how much to tip taxi drivers.

How much should you tip an airport taxi driver?

The same way you tip any other driver applies to airport taxi drivers.

If the driver assists you, reward them with an additional tip.

Should You Tip Taxi Drivers in Mexico?

I hate boarding taxis in Mexico because, unlike in North America, they charge unreasonably high prices.

However, if you get a good deal, it’s recommended to give the driver a small tip–10 to 20 pesos will do for a short ride.

If the cost is too hefty, get the exact change.

Over-tipping in Mexico is discouraged because it results in higher prices overall for the locals.

Uber operates in Cancun, so if you’re looking for an alternative, this is what I’d suggest using.

Should You Tip Taxi Drivers in Canada?

Canada is no different than the U.S. when tipping taxi drivers.

Whether you are in the US,  Canada, or any other part of the world, you have to deal with taxi driver tipping.

Tip the driver depending on the services they offer, but don’t make it less than 10% of the total fare.

For excellent services, make it 20% or more.

It’s a good idea to research tipping standards in the area you’re using a taxi to ensure you do it appropriately.

This culture of showing appreciation is recommended in all service industries.