It’s becoming increasingly important for drivers to protect themselves on the roads, and a dash camera is the perfect way to do that.

The Kingslim D4 Dash Camera provides peace of mind when it comes to your safety; with advanced features packed in a slim design, you’ll be covered in any situation.

In this Kingslim D4 review, we will take an in-depth look at all these features, as well as provide honest feedback on our own personal experience using the device. 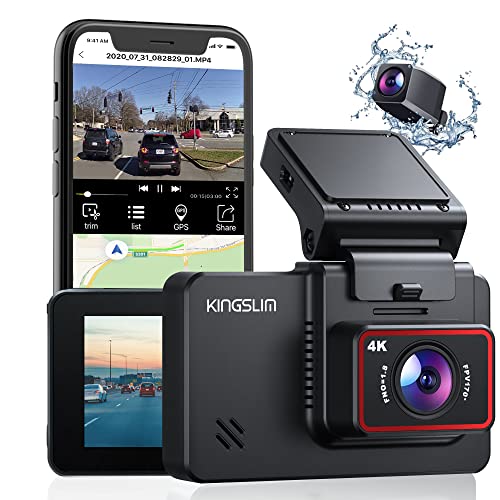 This camera is advertised as a powerful dash camera at an affordable price point.

At this price point, two cameras are rare.

We’d expect this from the higher quality units like the $399+ Nextbase 522 gw, but not at other similar competitors to this particular unit.

These two cameras alone make this unit immediately stand out.

To take advantage of those two cameras, Kingslim has built a feature that they call “Parking Monitor.”

The feature leverages loop recording from both cameras, continually recording as the vehicle is off and parked.

Combine Parking Monitor with tweakable shock sensors and you have a very powerful security feature that is ready to catch and foul play – purposeful or accidental – as it happens.

Support for Cards Up to 256GB

This camera comes equipped with support for SD cards up to 256GB.

Since the Loop Recording feature can be tweaked, larger cards are beneficial when setting the rolling rewrite time on the camera as higher durations.

Included on the back of the camera is a 3″ IPS touchscreen that makes changing settings and adjusting placement and field of view simple.

If the touchscreen isn’t for you, the camera can also be controlled using the Kingslim app for iOS and Android.

The camera was neatly and nicely packed.

The box was easy to open and everything was presented in a nice and orderly manner.

The boxes were grouped in a manner that made sense, with labels that clearly defined what each piece was and what it went with.

My initial thoughts on this camera were overall positive.

The camera appears to be well-designed, and it is small enough to fit pretty much anywhere in my windshield without being intrusive.

However, there were a few downsides that I wouldn’t expect to run into with a camera at this price point.

First, I noticed that there was no memory card included with the kit.

While these are fairly cheap to buy, some other cameras (such as the Nexar Pro) come with a memory card.

Second, it appears that you must use sticky mounts if you want to mount the camera on the windshield of your car.

I would have liked to see an included suction cup mount so that I don’t need to deal with sticky residue on my windshield when I take the camera off.

A sticky mount instead of a suction cup could potentially be a pain, especially if I want to move the unit around, take it down to inspect it, or a variety of other reasons that you might not want its location to be permanent.

Lastly, the sticker on my charger ripped while taking it off.

While this is not the end of the world, this is an initial indicator that some aspects of this camera’s accessories were of obviously low-quality in an effort to save money.

Setting up the camera is surprisingly easy and can be done in a few simple steps:

The camera, by default, comes with loop recording enabled and the other stock settings should work for almost every user.

If you’d like to modify these settings, however, you can do so in app.

We’d recommend installing this app because it is how you will play back the footage at a later time.

Like the setup, the installation of this camera is surprisingly simple.

The level of complexity comes down to one factor: whether or not you want to install the rear camera.

For this tutorial, I am only mounting the front-facing unit.

The process of doing so is fairly simple:

I would have liked to see a standard USB cable and adapter combo with this charger instead of the charging cable it came with, but those can be picked up for cheap on Amazon if this is an issue.

My Experience With This Camera

When I got the footage back, it was much higher quality than I had initially expected.

This is the footage from a drive that I recently did:

As you can see, the footage is clear, and the field of view is wide.

There is almost no lag and the camera captures moving objects with ease.

The timestamps are clear – helpful data when categorizing footage and a must for insurance cases.

This is exactly what I want from a dashcam.

One small issue I noticed is that the dash cam sometimes re-focuses itself automatically, leading to grainy footage.

This issue appears to be caused by the camera trying to focus in on the dirty water spots on my windshield.

Under normal driving circumstances, I could just drive with a clean windshield.

But in times that it is raining or snowing and I can’t maintain a clean windshield, I could see this becoming problematic.

When I parked and got out of my car, the camera continued to do its thing without me having to do anything.

Again, the footage is very clear, and the field of view is great.

Conclusion: Is the Kingslim D4 Dash Cam Worth It?

After testing this camera, we have concluded that the Kingslim D4 Dash Cam is a great choice for those looking to enhance their driving experience and protect themselves.

The front and rear cameras allow for more than one field of view, the camera has a very high-quality construction and design, and the unit itself is very simple to use.

The footage itself is crisp and clear. Additionally, it is very easy to browse and navigate after recording.

While there are small drawbacks like an included memory card or suction cup mount, the pros far outweigh these minor inconveniences.

Overall, this camera does exactly what it says it does, with few compromises. What you see is what you get, so this wins high marks from me.

If you are looking for a simple yet affordable camera that does it all, we recommend giving this one a shot.

How Do I Connect a Kingslim Dash Cam To My Phone?

Connecting a Kingslim dashcam to a phone is simple. Download the Kingslim app, power the camera on, and then follow the prompts within the app to connect to the camera’s wifi.

How Do I Format an SD Card for a Kingslim Dash Cam?

Formatting an SD card using a Kingslim dash cam can be completed in a few steps.

First, insert the card into the dash cam.

Next, click the “Settings” option and slide down to “Format SD”.

From the pop-up that appears, tap “Confirm” when asked “Format SD at once?”