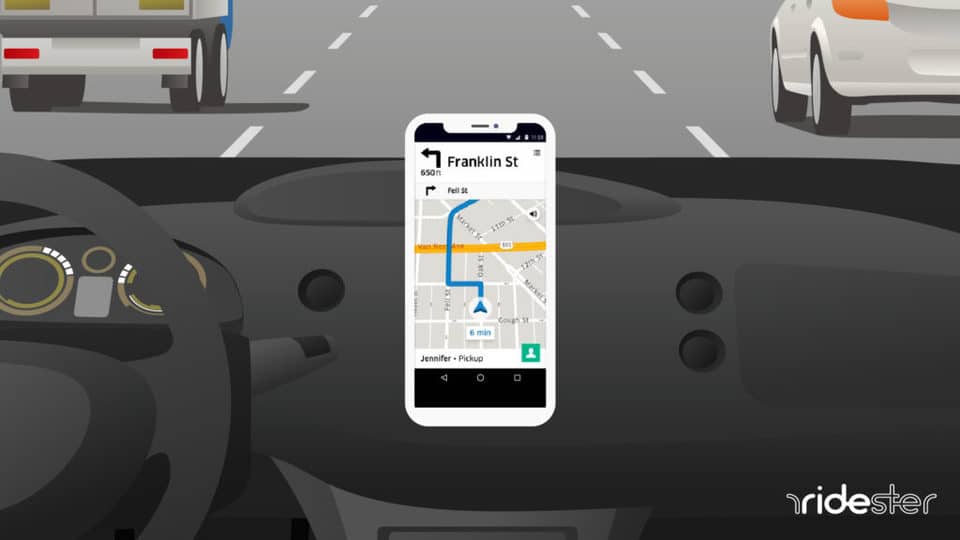 Have you ever wondered how the Uber driver gets from point A to point B with such efficiency?

You’re not the only person to marvel at the phenomenon or wonder how it happens.

Today, we’re breaking down the technology that makes that happen – Uber Nav.

What Is Uber Nav?

Uber Nav is the navigation system that Uber Technologies created to ensure their drivers have correct maps of the cities in which they operate.

When driving for Uber, it is essential to get from point A to B quickly and efficiently, so as far as rideshare driving goes, Uber Nav is one of the better map apps available.

Since Uber drivers typically uses the Uber app for everything work-related, it’s easy to see how an in-app navigation system would make their lives easier.

With the Uber Nav system, drivers can stay within the same app instead of switching between multiple options while driving.

Uber Nav offers a lot of peace of mind for Uber drivers who don’t like moving between apps while working.

How Does Uber Nav Work?

Utilizing all this information helps Uber Nav offer a more accurate and complete map of the area that Uber drivers serve.

Finding the correct route can be tricky and time-consuming.

With Uber Nav, the whole process becomes much more manageable.

It’s an excellent feature that seeks to meet the surge in Uber requests throughout some of the larger cities in the world.

Who Can Use Uber Nav?

The Uber Nav technology is built directly into the Uber driver app.

That means that the Uber Nav technology only works for Uber drivers.

At least in North America, the driver app allows Uber drivers to use the navigation system.

This technology helps drivers avoid any delay that might prevent them from getting to a job on time.

It can help immensely by predicting traffic patterns and avoiding construction and other delays.

While some drivers might prefer a third-party navigation app, Uber Nav provides Uber workers with all the information they need.

It’s a great feature that has improved over time.

Even in the earliest days when Uber Nav was not the most reliable, it still proved to work better than an application like bing maps.

There’s no way to account for the benefit of removing a distraction from drivers, like switching between apps.

And that’s precisely what Uber Nav does.

How Much Does Uber Nav Cost?

Because Uber Nav is an essential feature for Uber drivers who want to eliminate distractions, it comes with the Uber Driving App.

It does not cost anything for Uber Drivers to make the most of its services.

One of the great benefits of Uber Nav for an Uber rider is that the feature always aims to keep the cost of the ride as close to the original projected price as possible.

This means that the app always looks for the shortest possible route.

Since Uber typically charges by the mile, the app strives to keep the miles short.

And if it predicts a certain number of miles, the app will do its best to stick to that original projection.

It works in the interests of the Uber rider in this way.

Investors in Uber have assisted the company as it improved its technology and navigation system.

An Uber employee can explore alternate routes within the app if the person riding is interested in a different route.

Otherwise, the app takes care of the logistics.

Because there are so many third-party navigation systems on the market, Uber Nav has been routinely compared to other apps like Waze and Apple Maps.

There are many advantages to using Uber Nav, especially if you have an old or slow phone that doesn’t switch quickly between apps.

And if you know your city well, then the Uber Nav app is probably the best one for you.

Even if it freezers or turn directions come slow, you probably know the streets well enough to supplement and get to your destination in time.

Other ridesharing apps might provide similar built-in features for their drivers, but Uber goes above and beyond to make the driver’s life simple.

Uber Nav is an easy-to-use system that gets you where you need to go quickly.

And even when it slows or misses a road closure, it always catches up again.

However, if you’re uncertain about using Uber Nav or prefer a different navigation system, you can usually sync other maps with your Uber app.

Like Waze and google maps, some will sync easily and make switching simple.

Google Maps is one of the more popular navigation apps available.

You can easily download it no matter what kind of phone you have, and it has proven over the long seasons of its existence to be trustworthy.

However, despite being fairly accurate with its directions, there are many concerns that Google Maps might have privacy problems on some phones.

For this reason alone, it might be a good idea to avoid using Google Maps and stick with a different navigation system.

It also provides accurate service for Uber drivers, who can provide adequate and timely service to their drivers.

Waze is a newer navigation app that Google acquired in 2013.

The goal of Waze is to provide quicker navigation based on community-gathered data and GPS signals.

Users of the app can report traffic problems to improve the experience of other drivers.

Since learning how to use Waze is very easy, Uber drivers might use Waze as an alternative to Uber Nav.

The strong community base means that the app is constantly being fed information that makes its system more reliable for other users.

Uber Nav might provide more efficiency for Uber drivers, however.

Since it also collects data from other third-party navigation systems, it benefits from a very similar community-driven system in its way.

Next to Google Maps, Apple Maps might be another one of the most popular third-party navigation apps that you can download.

If you have Apple products, the app comes pre-downloaded for convenient use.

Apple Maps is known for being relatively reliable and accurate with time predictions.

It can predict traffic patterns and respond to road closures and accidents.

Where Apple Maps fails is the convenience.

Since Uber Nav is built into the Uber app, it’s much easier for Uber drivers to use that navigation system simply.

MapQuest is one of the older navigation systems available online. For a long time, MapQuest did not exist in the world of smartphones.

People used MapQuest in the days of printing out directions and highlighting with objective markers.

However, MapQuest has entered the 21st century with a modern smartphone application that’s now available across the board.

The company that began in 1967 is now offering mobile phone services to get drivers to their destination.

Where MapQuest can tend toward glitches or being slow, Uber Nav delivers better results at a faster pace.

How to Use Uber Nav

Using Uber Nav is quite simple for any Uber driver.

You can even change it to your default navigation app on the Uber app.

As long as Uber Nav is the default setting in your app, you can simply open the app to access it.

If Uber Nav is not the default navigation system, you can change that by going into your account, finding your app settings, and entering the navigation section.

You can simply select the app that you want as your default.

How to Add a Third-Party Navigation App to Uber

Using a third-party navigation app with your Uber driver app is the same as setting Uber Nav to your default.

As long as you have the third party app on your phone, you can follow the same steps to set it as your default navigation tool:

Once your default is set, your driver app will open the correct app whenever you select the option to “navigate” during a trip.

Uber Nav is the navigation system built into the Uber driver app that allows rideshare employees easy access to directions.

The technology makes life easier for drivers and riders alike and provides accurate, timely navigations that don’t cost too much for the person in the back seat.