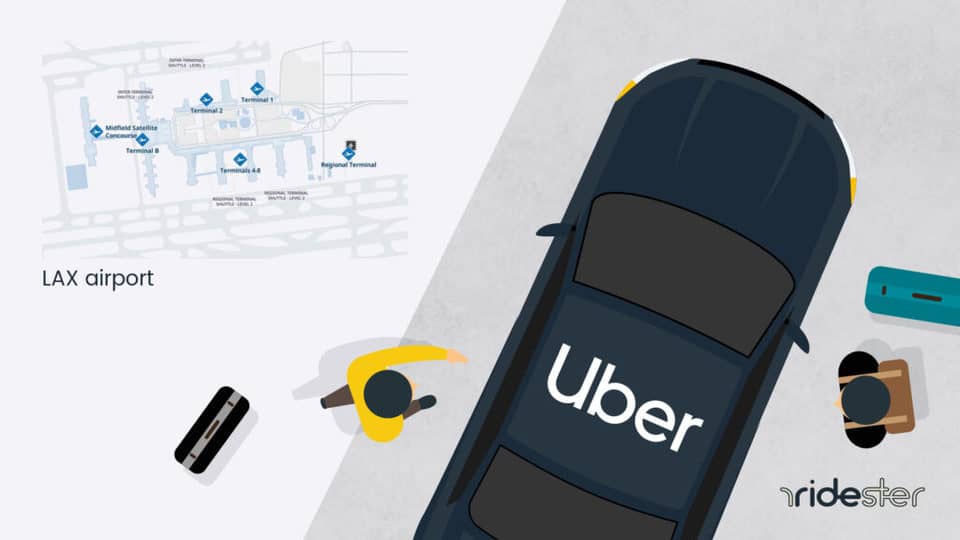 Are you planning a trip to Los Angeles?

Or are you leaving and not wanting to pay for LAX airport parking?

Booking an Uber is one of the easiest ways to get from the airport to your hotel.

However, Uber at LAX works a bit differently than at airports in cities like San Francisco, Chicago, or Denver.

Here’s what you need to know about getting an Uber or Lyft at LAX airport.

Can You Get an Uber at LAX?

Yes, you can book an Uber at Los Angeles International Airport.

However, unlike in other airports, you can’t book an Uber outside your terminal.

Instead, you have to go to a designated pickup spot, called LAX-it, for taxi pickups or to order a rideshare service.

Related: Can you get a Lyft at LAX?

Why Did LAX Ban Curbside Pickups?

The main reason for this was to reduce traffic jams and wait times at the curb.

Los Angeles International is currently doing a lot of construction.

Due to all the construction, as much as 30% of the regular curbside pickup and dropoff area is now unavailable.

Los Angeles Airport has had an issue with congestion for a long time.

LAX-it is the only area where you can hire a ride-hailing company like Uber (except for luxury services like Uber Black).

According to Los Angeles International Airport, LAX-it is expected to reduce congestion outside the terminals by 15%.

LAX-it is a designated lot for rideshare and taxi companies for all terminals at LAX.

It’s pronounced “LA Exit,” and there are shuttles to LAX-it from all terminals at the airport.

LAX-it has a special exit to the city just for taxis and rideshare companies, reducing your time in traffic on the way to your hotel or house.

You can no longer book an Uber or Lyft after exiting the baggage claim area (except for luxury options like Uber Black).

Rideshare drivers are not allowed to pick passengers up there; instead, they must wait at LAX-it.

Getting to LAX-it from your terminal isn’t complicated.

There’s a free shuttle from each terminal to the LAX-it lot.

In addition, if you don’t have a lot of heavy baggage, it’s possible to walk to LAX-it.

It’s a short walk, regardless of which terminal you’re landing in.

Once you get to LAX-it, open your app to request a ride.

You may notice that instead of the usual process you are used to when ordering an Uber, the process is a bit different at LAX-it.

Since many rideshare drivers will usually be lined up and waiting for passengers, most rideshare companies will give you a PIN code.

Wait in line and give the PIN code to the first available driver. You’ll then be able to start your ride.

LAX-it has different lanes for different rideshare companies, so make sure you’re in the right lane.

It might seem a bit confusing at first, but it will only take a few minutes to get the hang of it.

The LAX-it lot has public restrooms, and you can usually buy some food or drinks while you wait.

You can also charge your phone using public phone chargers.

Using LAX-it is only necessary when flying into Los Angeles International Airport.

If you are flying from the airport to another city, you can book an Uber at your hotel or house and have the driver drop you off right in front of the terminal.

Signposts direct you to LAX-it in case you want to walk; just follow the signs.

If you are taking the shuttle, there are designated pickup spots where you can wait.

Due to the way the terminals are set up, in a half-circle surrounding the airport (see a map here), LAX-it is closest to terminals 1, 2, 7, and 8.

If you’re flying into any of those terminals, walking to LAX-it is simple and might take quicker than waiting for the shuttle.

Directions to LAX-it From Airport

There’s no need to get a taxi from your terminal to LAX-it.

Instead, follow the signposts directing you to LAX if walking.

I recommend walking if you only have carry-on luggage or if you have suitcases that are easy to pull.

It also depends on which terminal you are flying into.

For example, walking from Terminal 1 to LAX-it will take around three minutes, while using the shuttle will take approximately 15 minutes, on average.

On the other hand, taking the shuttle from Terminal 4 will take 10 minutes, compared to around 19 minutes of walking.

How To Get to LAX-it

There are two ways to get to LAX-it: You can walk, or you can take one of the shared shuttles.

Either way, it will take no longer than 15-20 minutes, on average.

You can catch a shuttle to LAX-it from one of the green bus stop signs.

The shuttles should have “LAX-it” on their sides in big letters.

Taking the shuttle is the best option if you have a lot of luggage or are flying into Terminals 3, 4, 5, and 6.

Shuttles pick up passengers from all terminals, though they won’t necessarily stop at each terminal on the way to LAX-it to reduce wait times.

Typically, a new shuttle will come every 3-5 minutes.

The shuttle is free.

How Much Are Ubers at LAX?

That means that the cost of getting from LAX to your destination will depend on factors like:

Depending on traffic, the journey should take around 25-30 minutes.

If you order a luxury service, like Uber Black, it will cost a lot more.

How To Get a Ride From LAX

There are a few ways to get from LAX to your hotel, and not all of them require you to go to LAX-it.

Here are the top ways to get a ride from LAX.

Uber is the most popular rideshare service in the United States.

If you order an Uber X, you need to go to LAX-it.

You can start ordering before you arrive at LAX-it.

Don’t be surprised if you get a PIN that you need to give to the first available driver.

You may see lane managers at LAX-it who can help you.

Therefore, they are able to pick you up from the curb, unlike regular Uber drivers.

Opoli is an Uber alternative that operates at California airports like LAX.

Unlike Uber, it has no surge pricing.

Inspired by the free market, it uses a bidding system to allow riders and drivers to negotiate the price of a ride.

Lyft is the second most popular rideshare company in the United States, and it’s often cheaper than Uber.

You can compare prices to see which one will be less expensive.

Most Lyft riders will need to head to LAX-it, and you may get a PIN to give to the first available driver.

Taxis are available at LAX-it.

Unlike rideshare companies, though, they are also available at two other locations.

If you are arriving at Terminal 3, you can find taxis inside Parking Structure 3 between Terminal 3 and Tom Bradley International Terminal.

Taxis at those locations may be limited, but they are allowed to pick passengers up there to make things easier for people arriving at those terminals.

Finally, you can take public transportation into the city.

There are two free shuttle buses at LAX, one going to LAX City Bus Center and one going to the Metro Green Line at Aviation Station.

Wait at the PINK LAX Shuttle sign outside each terminal for both shuttles, but make sure to get on the right one.

You can also take the LAX FlyAway Bus from any terminal to Van Nuys or LA Union Station.

There are also some public buses going to different parts of Los Angeles and even outside Los Angeles.

See here for a map and more information.

Alternatively, you can look into SuperShuttle or Jayride.

Getting an Uber or Lyft remains the most accessible and straightforward option for most travelers flying into Los Angeles International Airport.

However, the process has changed, so you will need to get to LAX-it first, either by walking or taking the free shuttle, for rideshare pickup.