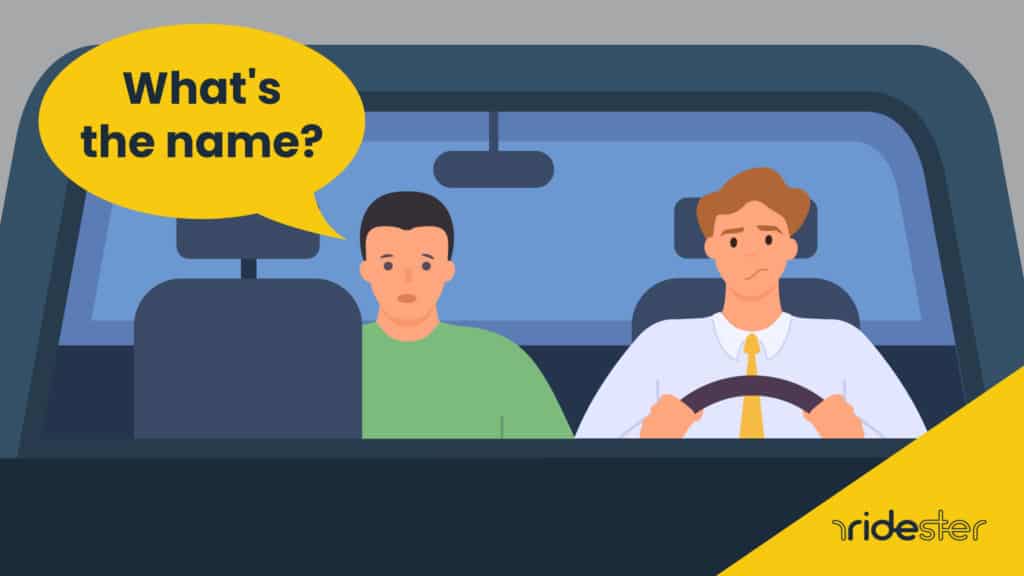 The rise of rideshare services like Uber and Lyft has made it easier than ever for vehicle-less travelers to get where they’re going.

It’s also opened the door for a number of unscrupulous transportation-related scams.

These carpool con jobs aren’t just dishonest—when pulled off successfully, they can impact a driver’s livelihood.

A prime example is the so-called “say my name” scam, in which cunning opportunists attempt to score free rides by way of a simple deception.

First we had the Uber code text scam, now this.

But what is the Uber “say my name” scam and how does it work?

Let’s break down the finer points of the grift and go over some ways you can keep from being taken in.

But first, a little background.

What Is the “Say My Name” Scam?

The “say my name” scam was born from tragedy.

On March 29, 2019, 21-year old Samantha Josephson was killed after entering a vehicle she mistakenly thought belonged to the driver of an Uber she had summoned.

The murder sparked a major backlash on social media, with calls for rideshare drivers to begin identifying their passengers by name to prove they’re there for the right person.

Samantha’s friends and family expressed their outrage in a hashtag: “#WhatsMyName.”

Concerned citizens picked it up and ran with it, urging others in impassioned posts to put their drivers’ authenticity to the test before accepting a ride.

But here’s the catch—that person getting in the car isn’t the real passenger.

They’re actually a shyster that just happened to be in the right place at the right time and managed to finagle an Uber ride without paying for it.

How the Scam Works The reason the “say my name” scam is so insidious is because it exploits the fear and mistrust common to both rideshare passengers and the people who are supposed to deliver them safely to their destinations.

After cases like Samantha Josephson, Uber riders are naturally hesitant to jump into a vehicle with someone they don’t know, who may or may not be a murderous lunatic.

Uber drivers are naturally hesitant to be regarded as murderous lunatics (it’s not great for business).

It’s therefore tempting for them to put the passenger at ease by acquiescing to their request, no questions asked.

If you hold a magnifying glass up to scenarios like the one described above, however, you’ll notice that something doesn’t add up.

Riders can view their driver’s name and photo, along with the make, model, color, and license plate number of their vehicle, at any time right in the app.

All drivers have is a name and a location. More often than not, it isn’t even a real name.

It only makes sense, then, for the responsibility to fall on their rider to correctly identify their driver, not the other way around.

That’s exactly the way it’s supposed to work, according to both Uber and Lyft’s basic instructions.

That way, the rider is armed with all the information they need to determine whether or not a driver is who they say they are.

Uber passengers shouldn’t be reluctant to confirm their names with their drivers, seeing as how they’re supposed to know them already.

Any time someone asks you to say their name, or refuses to give it when asked, consider it a red flag.

Example of How Scammers Deceive Their Drivers

Imagine for a moment that you’re a brand new Uber or Lyft driver.

Since you just started, you don’t have much experience navigating rapid-fire passenger interactions and making the kind of snap judgments they often entail.

You check your driver app and see that you’ve received a new ride request.

Excited, you switch on the ignition and cruise over to the specified location.

When you get there, you pull up to the curb, throw your car in park, and wait for your passenger to show.

A minute or two later, someone emerges from a nearby nightclub and approaches your vehicle.

They open the door and lean in, cautiously.

You proceed to shuttle your rider to their destination without incident.

They thank you and get out.

You return their thanks and tell them to have fun and be safe.

You’re feeling good about helping someone out and making a little money in the process.

It isn’t until you’ve already dropped them off that you notice you have a message from your actual passenger wondering where you are.

By this time, they’ve already requested another driver.

You’re out precious time and fuel with nothing to show for it, not even a cancellation fee.

When the Uber “Say My Name” Scam Goes Wrong

Check out this video shared by YouTube rideshare expert Dustin Is Driving to witness an attempted “say my name” scam fall apart in real-time:

As is typical for this sort of swindle, the woman initiates the exchange by asking the driver to say her name.

The driver is not buying it; he explains to her, “That’s not how it works.”

After he rightly refuses to say her name, the woman storms off angrily.

The driver advises her to review his company’s pickup policy.

Desperate or perhaps just confused, the woman’s friends venture two guesses at the driver’s name, both of them incorrect.

At this point, the driver has seen all he needs to see.

He pulls away, visibly frustrated.

This frustration is understandable given the frequency with which this kind of thing happens to well-meaning rideshare professionals who are just trying to make an honest living.

The guidelines, procedures, and points of etiquette associated with using rideshare services are always evolving.

Consequently, it can be tough to know what the right thing to do is.

Hopefully, these answers will help both drivers and riders handle tricky pick-ups in the future.

Are Uber drivers supposed to ask for your name?

The rideshare company’s terms of service clearly state that a driver should always confirm the name of their passenger before giving their own name.

Remember, all an Uber has to work with is the name supplied on the rider’s account.

Asking for this name allows them to verify that they’re picking up the right person and steer clear of circumstances like the ones that make the all-too-common “say my name” scam possible.

Can Uber drivers call you?

To protect the privacy of both parties involved, the Uber app is set up so that all communication must take place within the app.

Riders can ring up their drivers for assistance, but drivers can only send texts using the messaging function.

Neither can see the other’s phone number.

If you ever receive a phone call from someone claiming to be your Uber driver, hang up and call the police.

How can Uber drivers avoid the “say my name” scam?

Following these simple steps can help you prevent dubious riders from taking advantage of you:

The bottom line is that you should never let anyone into your vehicle until you’ve both established your respective identities—starting with them.

When it comes to promoting safety and ensuring that each rideshare transaction goes off without a hitch, it’s best to do things by the book.

There’s a reason that the book exists, after all.

If you’re a rider, make sure the person and vehicle picking you up match the info found in your driver’s profile.

If you’re a driver, ask your rider to confirm their name prior to granting them entry.

And if you need a more detailed refresher on Uber pick-up policies, be sure to read through their updated terms and conditions before your next ride.

5 thoughts on “What Is the Uber “Say My Name” Scam and How Does It Work?”