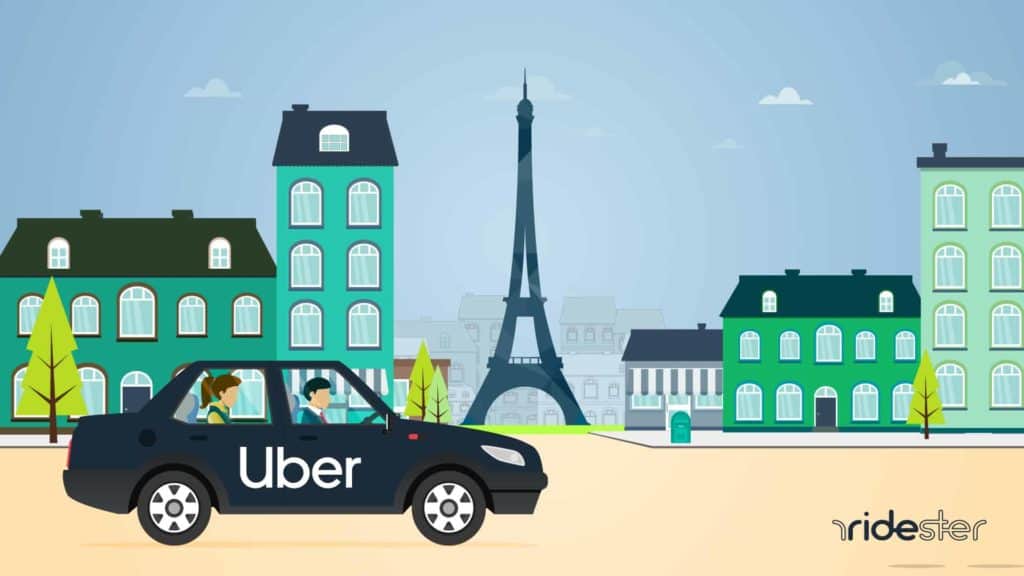 Paris is one of the most visited cities in the world, and with Uber available there, it’s easy to get around.

This guide will tell you everything you need to know about using Uber in Paris, from how to request a ride to tips for getting the best fares.

So whether you’re a first-time visitor or a seasoned pro, read on for all the details!

Is There Uber in Paris?

Yes. As in most of Europe, you can use Uber in Paris.

There is typically an Uber driver not more than a few minutes away in Paris, even late at night.

Is There Lyft in Paris?

No. Lyft works exclusively in North America, unlike Uber, which is a global company.

Lyft does not operate in Paris or other European cities.

However, for the sake of convenience and simplicity, we recommend that you stick to Uber.

You’ll be more familiar with the ordering process, and you won’t have to download any additional apps.

Can I Use Uber From the Paris Airports?

Yes, you can use Uber from the Paris airports.

However, if you’re flying in from the United States or Canada, you’ll most likely land at Charles de Gaulle Airport.

It’s less common, but some flights from the United States (from cities such as Los Angeles and San Francisco) land in Orly Airport.

Uber at Charles de Gaulle is sometimes cheaper than the airport taxis.

However, you will have to wait until your driver comes to you, and you’ll have to arrange a place to meet them (usually at the passenger pickup or drop-off locations).

How Much Does Uber Cost in Paris?

Pricing changes from one minute to the next, and it depends on factors such as your location, traffic conditions, demand, and the availability of drivers.

If it’s a short ride, you may pay as little as a few euros.

Typically, you’ll pay more than that.

The good part about Uber is that you can see your price upfront before ordering.

Is Uber Safe in Paris?

Uber is a safe transportation option in Paris.

Paris is a safe city in general, but crime does exist, and you should take some precautions when using Uber.

First, check the rating of your Uber driver.

If the driver has a low rating or is new to the app, consider cancelling your Uber ride and ordering a new one for your safety.

Once you get in the car, you can follow your trip in the app to ensure the driver is heading to the right destination.

Uber vs. Taxis and Paris

Finally, we get to the big debate: Should you use Uber or taxis in Paris?

Both options have their pros and cons.

When you use a taxi, you won’t know your fare upfront.

Taxi drivers in Paris use taximeters, so you’ll only know how much your trip will cost you once you reach your destination.

On the other hand, Uber will display your rate before you order a ride.

You’ll have peace of mind knowing you won’t be overcharged.

The only exception is when going from the airport to the city.

Airport taxis at Charles de Gaulle have a fixed rate of €53 or €58 (depending on the side of Paris you’re heading to).

They’re available from the taxi stand, usually without any waiting.

Getting an Uber from the airport is sometimes cheaper than a taxi, but it could be a tad more complicated.

The same goes for many Uber drivers.

The difference, however, is that when using Uber, your driver will see your destination in the app, so the language barrier won’t be much of an issue.

When using Uber, you can also pay with your credit card.

While some taxi drivers in Paris accept credit cards, not all of them do, and using your credit card abroad may incur additional fees.

Furthermore, you can even pay with PayPal when using Uber abroad, although PayPal’s exchange rates are not very favorable.

In general, Uber is safer and more convenient than taxis all over the world, and Paris is no exception.

You can order a ride from your app and save yourself the hassle of communicating with a driver in a foreign language.

Some taxi drivers might try to scam you if they see you are a tourist.

However, Uber drivers risk getting reported and having their accounts deactivated if they try to pull a scam on you.

Furthermore, you’ll know the price upfront, and you can pay with your credit card and enjoy a cashless experience.

There are some benefits of using taxis over Uber, however.

For example, if you need a taxi ASAP, flagging one down from the street might be a bit quicker than ordering one in your app.

In addition, Uber requires an internet connection to work.

If your mobile phone provider doesn’t allow roaming, you may need a local French sim card to use Uber, unless you have Wifi.

Some providers support roaming but charge high fees for each MB of data you use, so keep that in mind as well.

If you don’t have internet, you can always use a taxi.

Both Uber and taxis will get you to your destination quickly.

However, Uber is often cheaper.

Again, since Uber uses a dynamic pricing model, that’s not always the case—taxis can be cheaper.

Though, since taxis won’t give you a price upfront like Uber, it will be impossible to know whether taking a taxi will be less expensive.

Ordering an Uber can give you more peace of mind.

Other Ways to Get Around in Paris

Uber isn’t the only transportation option in Paris.

Here are the best ways to get around Paris besides Uber.

For the most part, taxis in Paris are safe, and drivers are friendly and professional.

The largest taxi company in Paris is G7.

You can also flag down any taxi from the street.

For short trips, consider enlisting the services of a tour guide.

Tour guides provide private transportation in comfortable cars, and they’ll show you the best sights of Paris while you’re there.

Tour guides can help you get back to the airport and even arrange hotel stays.

Various companies offer private shuttles to and from the Paris airports.

Your hotel may even offer a shuttle, so contact them in advance to arrange that.

You can also arrange a private shuttle to anywhere in Paris.

Paris is a pretty walkable and pedestrian-friendly city.

There are sidewalks and stoplights.

It’s generally safe to walk around Paris, even at night, though you should ask your hotel receptionist or tour guide if you’re unsure about the safety of a particular neighborhood.

You can often walk between top tourist attractions, such as the Eiffel Tower and the Arc de Triomphe, which are within walking distance (20-30 minutes).

You can also rent a bike and use that to get around the city.

This option is better in the summer when the weather is warm.

Ask your hotel if they can arrange a bike rental.

Are you nervous about using Uber in Paris?

Here are answers to some questions that may be on your mind.

Many Uber drivers in France speak at least some English.

That is particularly true in Paris, the capital city.

However, it isn’t something you should expect or rely on, as your Uber driver may only speak French.

Despite that, you can still use Uber as you always do.

Uber will show your driver the destination you put in and give them directions in the app, so you won’t need to talk with them or tell them the address.

Should you tip your Uber driver in Paris?

As in the United States, tips are appreciated but never required.

France may not have the same tipping culture as the United States, but if your Uber driver was friendly, drove safely, and got you to your destination on time, consider giving them a tip.

They work hard to make a living.

Can I contact support for problems with Uber in Paris?

You can contact Uber customer service in the app for any problem you experience while using Uber in Paris.

You may be routed to a French representative, but the app will automatically translate messages you receive from support, so there will be no language barrier.

Uber is one of the best ways to get around Paris, especially if you are there for the first time and don’t speak any French.

You won’t need to install any additional applications—just use the same Uber app as before.

If you plan on using Uber in Paris, make sure your mobile phone provider supports international roaming, or buy a sim card at the airport when you arrive.